As the weather warms up, I’ve been watching the taro plants growing in the southeast corner of the garden. Although they’re in a sheltered spot, they usually die down for the winter, and grow back in spring.

I’m very fond of my taro plants. They came from my friend Jane when she was dismantling her Hamilton garden and moving to the East Cape.

The original plants came from Jane’s family connections in the Kawhia area. According to tradition the taro arrived in New Zealand on the Tainui canoe, with the first settlers to the Waikato area.

Taro is a food staple in many parts of the world. It’s believed to have originated in India, and spread east to Asia and the Pacific, and west to Eqypt, Africa and the Mediterranean. New Zealand ethnobotanist Peter Matthews has researched the genetic and cultural origins of taro In New Zealand and other parts of the Pacific.

Taro was grown traditionally by Maori in the northern half of the North Island. In the 19th century it became less popular as a crop, probably after potatoes were introduced. There are different varieties of taro across the Pacific.

Having spent my childhood in Papua New Guinea, I’m very partial to taro. The heavy, glutinous roots are a nutritious, high-carb comfort food. I have never tried to grow taro as a root crop in my garden, mainly because I’m too lazy. I’ve spoken to Samoan gardeners who say they grow taro here. I give the taro plants compost every year and water them in very dry spells.

In Auckland you can buy taro leaves at the Avondale and Otara markets, so there must be people growing taro commercially. But I think the large, hairy, brown roots are usually imported from Fiji, Rarotonga and Samoa.

The main way I use my Tainui taro plants is cooking the leaves with coconut cream. My husband Matthew also loves making this recipe, if he gets to the plants before me. We take one or two leaves from each plant, so they don’t get too stressed. 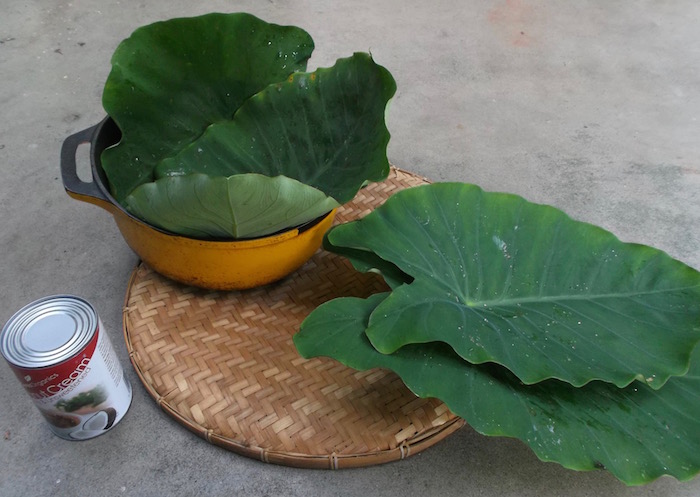 Above: taro leaves and coconut cream, about to go into the oven.

NEVER try to eat uncooked or lightly cooked taro leaves. Or raw taro roots. All parts of the plant contain oxalates that will damage your mouth and stomach. Taro – both roots and leaves – needs long slow cooking in liquid, to make it safely edible. (The absolute best way would be in an earth oven.)

I have heard that there is a south-east Asian taro variety where the stem can be eaten without cooking – but I wouldn’t risk it unless I was with someone who really knew what they were doing. It’s a bit like wild mushrooms – a little knowledge can be dangerous.

I always cook taro for at least one hour or longer. That’s okay with me – I love slow food.

NB the sap from taro leaves and roots can also be irritating to skin, so be cautious when handling (or wear gloves).

I call this recipe palusami, but I’m aware that it isn’t an authentic Samoan palusami, more of a Pacific “fusion” interpretation. However, it is delicious.

Pick six or seven large taro leaves. (This looks like more than you need, but they will cook down into a much smaller quantity.)

Cut stalks off leaves. Discard stalks. Place leaves in a cast iron pan with a lid. (Don’t worry about chopping them up as they will disintegrate during cooking.)

1 can coconut cream – I prefer Trade Aid or Ceres coconut cream, because it doesn’t contain any chemical additives. Sadly, all the Pacific brands include preservatives/ stabilisers.

a sprinkle of ground black pepper

one or two tomatoes, chopped (optional)

Heat gently on the stove until boiling. Then place in oven to continue cooking slowly for 2 hours. (At least one hour, but longer is better.) Add water if it starts to dry out.

The end result is a dark green puree, with a wonderful rich flavour, like nothing else on earth.

1.  Cook on top of stove, with the burner turned down low.

2.  Cook in a slow cooker for several hours.

3.  Traditionally, palusami is wrapped in banana leaves and steamed in an earth oven.

This is a popular dish from coastal Papua New Guinea. I remember my parents’ friend and colleague, ethnobiologist and indigenous science expert Ian Saem Majnep, cooking this for our family when he stayed with us. Saem and my father, Ralph Bulmer, co-authored some groundbreaking books on indigenous science of the New Guinea highlands. Here’s a link to a post I wrote about my dad.

Saem was from the Kaironk Valley in the remote eastern Highlands, where coconut palms don’t grow, but he adapted his cooking to use local ingredients when living in Port Moresby.

It’s a very simple recipe. The quantities of root vegetables and chicken can be varied to suit the number of people you are feeding.

You start with a pan of taro leaves, coconut cream and other ingredients (as in the recipe above).

Heat gently on the stove until boiling. Then place in oven to continue cooking.

Add pieces of chicken to the pan after the taro leaves and root vegetables have been cooking for about an hour. Return pan to the oven and cook for about another 45 minutes, or until the chicken is tender.