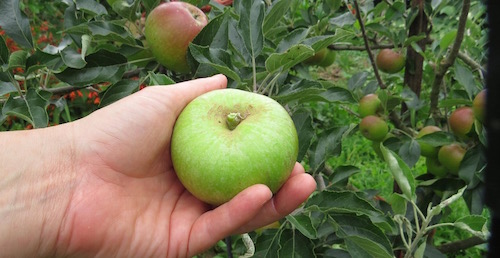 My latest favourite home-made beverage is honeygar.  It’s simply my home-made apple cider vinegar, combined with Sweetree Kirikiriroa raw honey and diluted in a glass of water. If you’ve never tried it, you’re in for a treat.

I think honeygar is the next kombucha.

I’ve been making kombucha for years and while I drink it myself, the other members of my household mostly ignore it. But honeygar disappears as fast as I make it.

We always drink honeygar diluted – one tablespoon in a glass of warm or cold water. Undiluted it’s hard on tooth enamel, and also it tastes far too strong. (I drink kombucha diluted as well.) 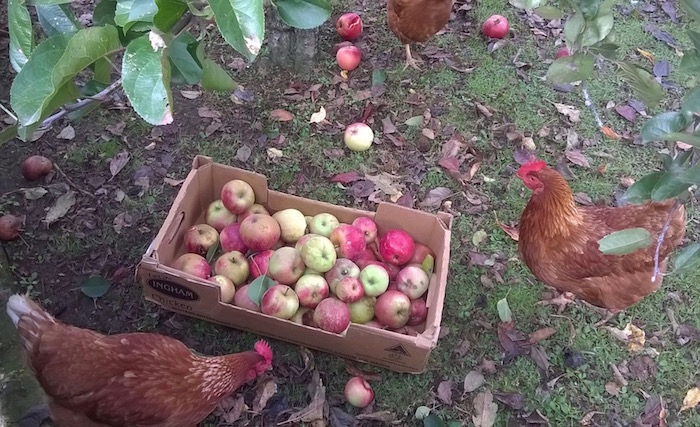 Above: I make my own cider vinegar from windfall apples. All photos used in this article are by Dani Edwards.

A couple of companies sell honeygar in New Zealand, if you don’t want to make your own. Comvita, the Bay of Plenty honey producers, make honeygar. It’s $18.30 for 750ml. (Fair enough – it’s a good quality product.) I’ve also found an imported certified organic honeygar that’s about twice the price of Comvita’s.

Honeygar is a traditional European non-alcoholic, non-caffeinated beverage. My great-grandparents would have been familiar with it. Before the advent of commercial soft drinks and juices, something like honeygar would have been consumed in any country where apple cider vinegar is made, which is just about everywhere in northern and central Europe.

Some traditional names for this kind of drink are “switchel”, “swizzle” and “haymaker’s punch”. According to Wikipedia, the term honeygar was coined in the 1950s by Dr D.C. Jarvis, author of Folk Medicine: A Vermont Doctor’s Guide to Good Health. I’m skeptical – I think it’s probable that the name was already in existence.

Laura Ingalls Wilder, author of the “Little House” children’s novels about a pioneer family in the mid-western United States in the 19th century (I read them as avidly as my sons read Harry Potter), describes a similar beverage. In The Long Winter, Laura’s mother serves a drink made from vinegar, sugar and ginger diluted in water to thirsty haymakers.

It tastes good and it’s thirst-quenching. I’d rather drink dilute honeygar than plain water. Unless you’re drinking fresh spring water, adding a splash of honeygar or kombucha makes it taste a lot better. In Nourishing Traditions Sally Fallon says our bodies don’t recognize plain water as “food”, and just flush it straight through. I think combining water with a small amount of honeygar or kombucha makes a difference to the way my body deals with it.

A glass of water with a splash of honeygar has much less sugar than fruit juice.

Apple cider vinegar and raw honey are well established in European folk and herbal medicine traditions. They are both antibacterial and antiseptic, amongst other qualities.

Apple cider vinegar is claimed to be helpful for a wide range of ailments ranging from sinus infections and arthritis to diabetes.

My husband Matthew started drinking honeygar because he had a chronic sinus infection and the alternative was taking antibiotics longterm. He’s been taking honeygar regularly for more than two years and hasn’t had a recurrence of the infection.

There are plenty of anecdotal accounts of the benefits of apple cider vinegar, but little research to back this up. However, that’s the case with most traditional remedies.

This is partly because there’s little profit to be made, so it’s hard to get research funding. Also the active ingredients can be quite variable with natural, live substances such as these. (The widely varying levels of active ingredients in manuka honey is a case in point.)

In one study it was also linked with weight loss, which has led to excited claims that apple cider vinegar is a magic bullet for dieting. Again, I’m skeptical (I’m quite a skeptic, for someone who loves herbal medicine and traditional fermentations!).

But, it makes a lot of sense to me that stabilizing blood sugar and cholesterol could be a really helpful step for anyone trying to manage their weight sustainably. 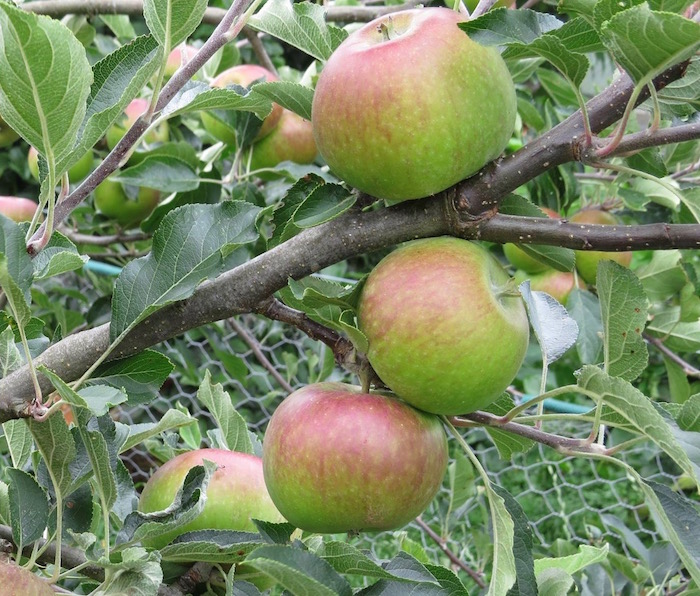 You want the cloudy, expensive stuff. Or make it yourself from windfall apples – it’s not difficult. This is the right time of year for it.

Here’s a link to my article about how to make apple cider vinegar.

Cover and leave on the bench for a few hours until the honey has dissolved into the vinegar. You might have to stir a bit.

The proportions of vinegar and honey can be varied according to taste.

I’ve found recipes that suggest half honey, half vinegar, but this is too sweet for me. Also, good quality raw honey is expensive!

Keep the honeygar in a bottle in the fridge. The honey and vinegar will ferment if you leave them at room temperature. You will end up with something called oxymel, which the Ancient Greeks revered. (I’ve never tried making it.)

Combine in a cup of water:

Stir to mix and drink.

Some recipes suggest using boiling water to dissolve the honey. But, if you’re using good quality raw honey and vinegar, boiling water will destroy a lot of the active ingredients. Make sure the water cools down a bit before you mix the drink.

What to do with honeygar

Make a bubbly drink using soda water with honeygar. It will fizz like crazy.

Finely grate root ginger and add 1 tablespoon (or more) to the bottle of honeygar. Or make ginger syrup by boiling grated root ginger with water and sugar, and add a small amount to your diluted honeygar drink.

a dash of mustard

Add salt and pepper to taste.