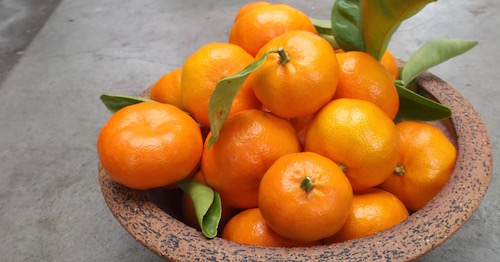 When you eat locally, you become very aware of what’s in season. Right now, in mid-September, there isn’t much fruit at the farmers’ market.  There’s a new stall selling excellently ripe oranges grown at Ohinewai. There are plenty of lemons, and there are apples that have been in a coolstore – i.e. they were picked a few months ago. We’re near the end of winter. Even in the glorious Waikato it’s unreasonable to expect a bounty of fresh fruit at this time of year.

There is actually quite a lot of local fruit around. It’s just not commercially available. We still have plenty of grapefruit on the tree, even after making two batches of marmalade.  And Melissa from my ukulele group gave us a bag of beautiful limes yesterday. Perfect for margaritas!

On Tuesday at our World Voices practice, my neighbour Fiona asked if we wanted some mandarins. “Our tree has far more fruit than we can use ourselves,” she said. So I got some secateurs and a bag and went to check out Fiona’s orchard. I climbed past dormant apple trees and flowering plum trees to the highest, sunniest part of the garden, where a grapefruit tree, an orange tree and a mandarin tree were all laden with beautiful ripe fruit. 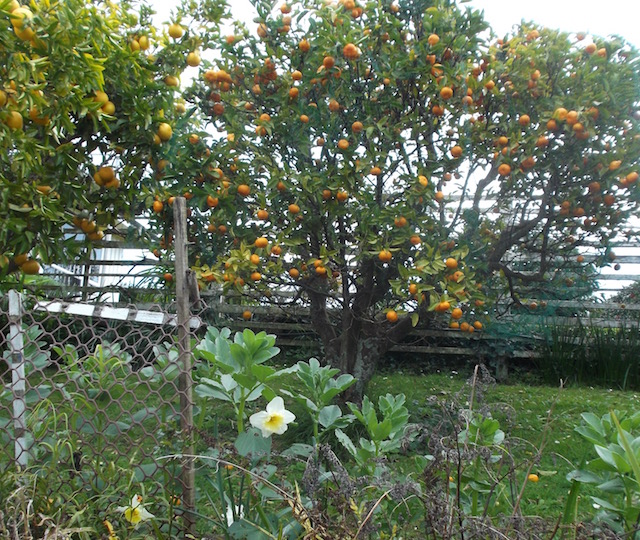 Above: Fiona’s mandarin tree, laden with ripe fruit in September. Grapefruit at left.

The Waikato doesn’t have an ideal climate for growing citrus commercially on a large scale, unlike the Bay of Plenty or Hawke’s Bay. But plenty of backyard gardeners and people with lifestyle blocks are growing citrus successfully, including David Whyte, who has a small organic citrus orchard north of Huntly and sells to Ooooby in Auckland. Here’s a link to my article about citrus on this website.

A while back I wrote a post about how we can eat home-grown fruit all year round in the Waikato. Here’s a link to the article. Maxine Fraser of the Treecrops Association told me that the most obvious fruit to harvest in September would be mandarins and avocados. Tamarillos are also ripe in September, but they’re frost-sensitive. We love tamarillos, but aren’t very good at growing them. We had a couple of good years from our tamarillo tree, and then it keeled over and died. We should have protected it with frost cloth, but we didn’t know that.

The other way to eat local fruit in late winter is to have a good stock of summer fruit preserved in season – bottled, frozen or dried. Sadly, our stocks weren’t enough to last us through the winter. The dehydrated feijoas and plums were finished a long time ago. (Actually they were so yummy that people were eating them straight out of the dehydrator.)