Too ugly to eat? 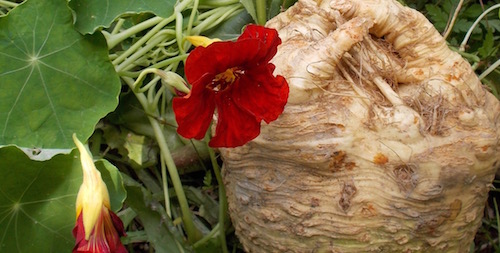 A huge celeriac turned up in the last Ooooby box. (Sadly, Ooooby have centralized their operations to Auckland.)

Readers of this blog will know that the Waikato Foodbasket is fond of weird vegetables – but celeriac is just about the ugliest I’ve ever come across. In a world where people don’t want to buy slightly blemished apples, I can see why we can’t find celeriac in supermarkets! Maybe in France.

After offering the local food box service for the last two years, Ooooby have decided to centralize. They say they found it too difficult to source locally grown food in this region. I could still get a box delivered from Auckland. But I’ve cancelled the order since I’m aiming to eat food grown in the Waikato where possible.

Celeriac sounds like a diagnosis, but it’s actually a variety of celery cultivated for its edible roots. In the United States it’s called “celery root”. In French it’s “celeris” and in German “sellerie”, both of which sound much more elegant.

Anyway – there was at least a kilo of celeriac sitting in the vege drawer. What to do with it? I turned to my trusty dog-eared copy of Cuisine Bon Marche, Hugh Fearnley-Whittingstall’s first cookbook from back when he was a green 20-something. Hugh said the absolutely best way to cook celeriac is in a gratin.

And he was right. It was utterly superb: wonderful texture, and subtle, almost nutty flavour. A bit like celery, but milder.

I’m inspired to plant some celeriac in the garden. I found some Oakdale Organics seedlings at Palmers. According to the gardening books celeriac likes moist, rich soil, well mulched so it doesn’t dry out in summer. We’ve been using mulch delivered by Trevor from Good Wood, on Morrinsville Rd – it’s even certified organic!

The leaves and stalks can be used in place of celery in stocks and soups, although they’re usually too strongly flavoured for salads.

Other ways to eat celeriac

1.     Boil until tender and mash, with or without other root vegetables.

My husband Matthew made this. I ate it with great appreciation.

juice of half a lemon

Peel celeriac, cut in half, then slice each half as thinly as possible – about the thickness of a coin. Put slices into a basin of water mixed with lemon juice as you go (so they don’t go brown). Drain the slices and pat dry with a clean tea towel or paper towel.

In a large mixing bowl, toss the celeriac slices with 2Tbsp of the oil and the other ingredients.

Transfer to a large, oiled baking dish. You don’t have to layer the gratin piece by piece, but try to make sure the pieces are lying flat.

Pour over any cream remaining in the bowl. Trickle the remaining oil over the top.

Bake in a preheated oven 200degC for 45-50 minutes, until the celeriac is completely tender and the top is browned and crispy.

Matthew added 4 rashers of bacon, cut into small pieces and fried before mixing with the celeriac and other ingredients.