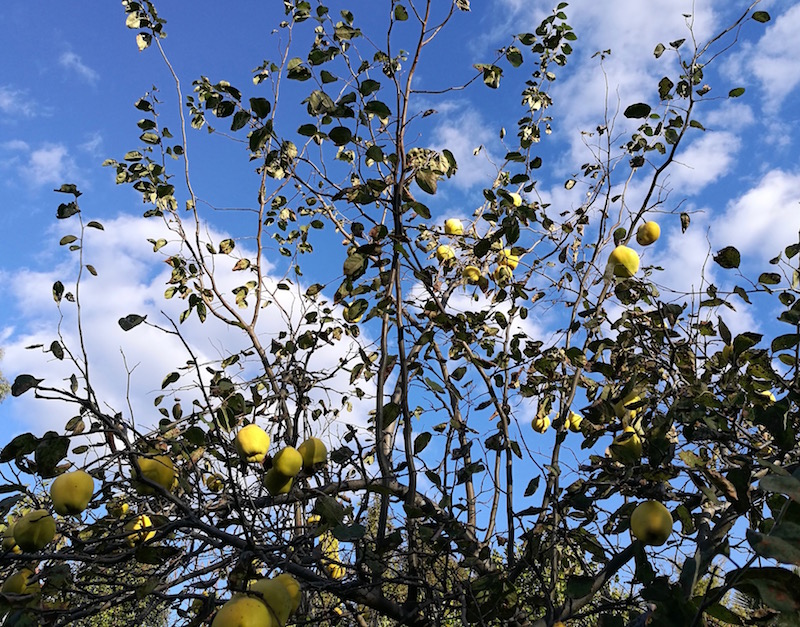 There’s a garden in my neighbourhood with a quince tree on the front lawn. At this time of year it’s festooned with fat yellow quinces. And the grass around the base of the tree is covered with windfall quinces.

Quinces look like big blobby yellow pears, covered with soft grey down, which comes off when they’re fully ripe.

They are one of those weird fruits that the Waikato Foodbasket loves.

Quinces are a traditional fruit in Europe and Western Asia. But they’re not common in 21st century New Zealand.

Quinces don’t sit well on a supermarket shelf. You can’t put quinces into lunchboxes. You wouldn’t want to eat them raw.

The main way I’ve come across quinces in New Zealand is in the form of quince paste. Quince paste (or quittenwurst, as the Germans call it) is a delicious traditional European preserve that’s often sold in small jars or packages at local farmers’ markets and in specialty shops at Christmas time. I’ve bought quince paste from Over the Moon’s Putaruru shop, and at La Cave in Hamilton.

The sweet-sour flavour of quince paste goes wonderfully well on sourdough bread and/ with cheese.

This article is about the European/ Eurasian quince, Cydonia oblonga. Quinces are in the same family as apples and pears.  There are other distantly related trees that are also called quince, including Chinese quinces, Chaenomeles langenaria, also known as “flowering quinces”. The Japanese quince, Cydonis japonica, is mainly grown as an ornamental for its red flowers.

Organicauthority.com says quinces may have been the forbidden fruit that tempted Eve (if you’re literal minded).

Quinces are one of those x-factor, quality of life foods that can transform other ingredients. They have an amazing, subtle fragrance, flowery and fruity at the same time.

The quince flavour is a bit like apple, a bit like pear, and something else beyond that.

Quinces magically turn pink when cooked! The only other fruit I know of, that does that are loquats. Here’s a link to my post about loquats.

Quinces are full of vitamins, and they’re valued in herbal medicine in Europe and Asia.

Where to find quinces

You’ll find quinces in old gardens; in the gardens and lifestyle blocks of tree crops enthusiasts, and probably at the farmers’ market at this time of year, if you get there early enough in the morning.

If I was looking for a quince supply I’d ask at a Treecrops Association meeting, and also my local OrganicFarmNZ group.

I’ve never had a quince tree, mainly because I don’t have space in my Hamilton garden. A quince grows into a deciduous tree up to 8m high. They’re self-fertile, but produce more fruit if they have another tree as a pollinator.

Quinces grow best in a temperate climate with dry heat. They are frost hardy and need a cold period below 7degC to flower properly.

The Waikato is too humid for quinces – they tend to get lots of diseases. So locally grown fruit aren’t usually perfect, they have a few bugs in them. But I don’t mind trimming out the buggy bits.

Quinces ripen in autumn and should be picked before the first frosts. They fall off the tree when ripe, but you can pick them earlier than that, and they’ll continue to ripen.

How to eat quinces

You can technically eat quince raw, but I don’t know why you’d bother. Raw quince is crunchy, sour and astringent (i.e. mouth puckering).

They are so much better cooked. The fragrance and flavour is released. And with long, slow cooking they turn that enchanting pink colour!

You have to sweeten quinces. I use sugar, but honey also goes well with quinces.

My husband Matthew has just made two batches of this delectable substance, which is halfway between jam and marmalade. His recipe comes out of A New Zealand Country Harvest Cookbook, by Gilian Painter. NB Matthew says he uses a lot less sugar than the recipe calls for – he just adds sugar until it tastes right.

Rub the down from the quince skins. Peel, core and slice the quinces finely.

Remove the rind from the lemons with a zester or grater.

Place the quinces, lemon rind and water in a large pan until tender.

Add the lemon juice juice and sugar (to taste).

Stir until sugar is dissolved.

Bring to the boil and boil fast, until the marmalade will set when tested on a saucer.

Pour into jars and seal.

Even half a quince, added to an apple crumble or pie, will transform the dish. It adds a delicate pinkness as well as the quince flavour and aroma.

This recipe is from Hugh Fearnley-Whittingstall.

Peel quinces and hollow out the core with a sharp knife, or use an apple corer. Fill the cavity with butter creamed with an equal quantitity of sugar. Bake in a moderate oven 180degC for 30 minutes or until the quinces are tender.

Serve with cream and more sugar if needed.

My friend Jane says, “Don’t make this in a cast iron pan or it will taste metallic.”

Method
Peel and core the quinces.

Cook the quinces very slowly in a little water on top of the stove, in the oven or in a slow cooker, until the fruit is tender and a ruby colour. On the stove this takes two or three hours.

Purée the fruit in a mouli or blender with enough of the water to make a smooth puree.

Measure the puree. Place in a saucepan and add an equal quantity of sugar

Cook the purée slowly, stirring continuously, until it comes away from the sides of the pan. While it is cooking, it is like an erupting volcano. Protect surfaces with towels, and wear gloves if cooking a large amount.

Pour into a shallow bowl or pan that has been lined with baking paper (not waxproof paper) or clingwrap, and allow to cool.

Cut into squares or wedges.

Store in airtight container, separated with wax paper or baking paper. Do not refrigerate.

For longer shelf life, dehydrate the quince paste. Two methods: 1. Place in a single layer in a container, cover with a tea towel, and allow to sit in a cool cupboard for a month or more. (But watch out for ants, flies and mice!) 2. Place quince paste in a dehydrator on a low heat for 6 – 12 hours until no longer sticky.

Brandy to cover (or gin, or vodka)

Grate the whole quinces, including the skin, into a 1 litre jar.

Add the sugar and cover with brandy.

Screw on a plastic lid.

Leave the jar in a cupboard for 8 weeks.

Strain out the pulp and taste the liqueur. Add more sugar if necessary.