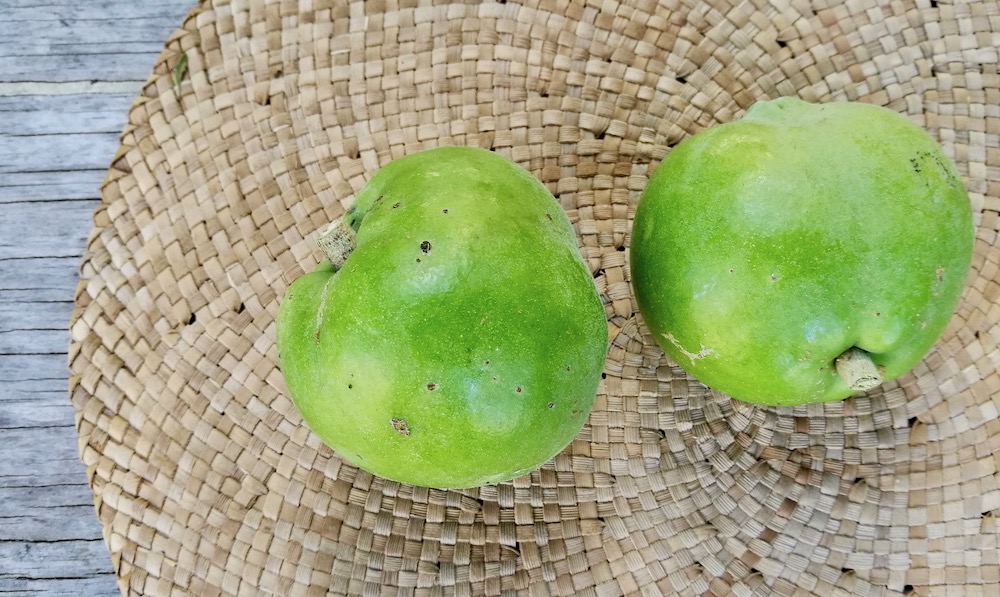 As regular readers will know, the Waikato Foodbasket loves strange and unusual fruit. This week I’m in love with casimiroas.

I first encountered this fruit a few years ago. Some friends had a huge tree that was absolutely laden with casimiroas. We were lucky to get landed with a big box of lumpy green fruit. Sadly, the tree fell over in a storm a couple of years ago.

Casimiroa edulis is also called the white sapote. It’s a sub-tropical tree, native to Mexico and Central America. It’s named after Casimiro Gomez, who was an Otomi Indian (indigenous Mexican) hero of Mexico’s War of Independence.

The fruit is oval and green, about the size and shape of an avocado. It doesn’t look anything special – but the flavour is amazing.

Casimiroas are soft, creamy and sweet, with a hint of (I think) coconut in the flavour, and a subtle fruity aroma/ flavour, like a pear. They’re also sometimes called “ice-cream fruit”. They fill that “banana” space for me.

They’re full of nutrients including vitamins A and C.

I think casimiroas should be a lot better known!

Casimiroas are quite different from custard apples, cherimoya, which are a South American tree fruit with sweet white flesh, but lots of small black seeds. I like casimiroas better.

Casimiroa trees grow well in many parts of New Zealand. The mature trees can cope with temperatures down to -5 degrees Celsius. However young trees need frost protection for the first few years. The tree should start producing within six or seven years. They don’t need much feeding and can tolerate drought, but need water in late summer for good fruiting.

A healthy mature tree can produce up to 1,000 fruit in a season. The fruiting season is May to July.

You won’t find casimiroas in a supermarket, and probably also not in fresh produce shops.

Mine came from the Ongare Point Organics stall at Hamilton Farmers’ Market.

You could find someone who has a tree and barter with them.

Or, if you have space and time, plant a tree.

The local Treecrops Association will have members with experience with casimiroas.

Casimiroas can be picked when they’re not fully ripe. They will be hard and green.

You just leave the fruit at room temperature until it softens. This might take anything from a few days to two or three weeks (depending on the season). The skin will be slightly wrinkled and a bit squishy. It’s pretty easy to tell when this happens. When they’re soft, they need to be eaten within a few days.

I have read that ideally casimiroas are left to ripen on the tree. This may result in even better flavour – but you’d have a huge amount of fruit to eat all at once, and you’d be competing with birds and possums.

The best way to eat casimiroas is freshly cut, in slices.

First, peel off the green skin with a paring knife. The skin doesn’t taste good, so make sure you peel all the green away. There’s a large stone in the centre of the fruit.

Casimiroas are great in fruit salad. Unlike bananas, the slices don’t go brown quickly, so the fruit salad can be assembled ahead of time. The sweet creamy texture and flavour of casimiroas complements many other fruits.

A handful of guavas or Chilean guavas – I foraged mine from a neighbour’s hedge.

2 ripe mandarins, peeled and sliced – our mandarin tree is laden with fruit this year.