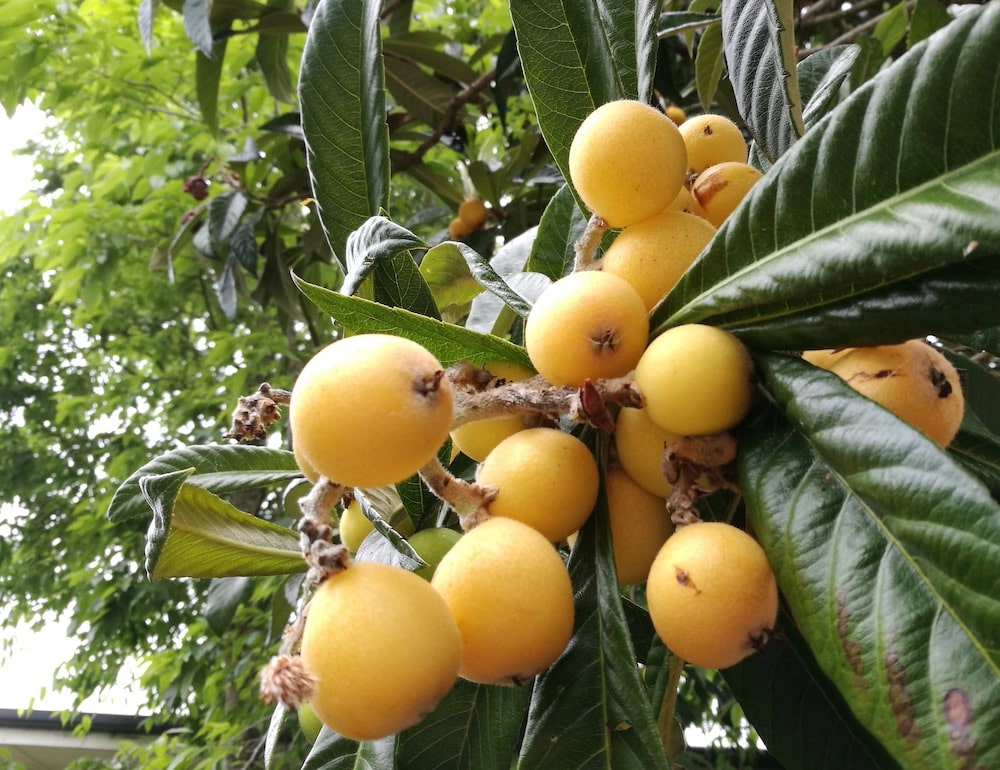 The loquat tree on our driveway has been laden with fruit this year.

I’ve been loving the golden egg-shaped fruit. Loquats have a sour-sweet, aromatic and slightly astringent flavour that I especially enjoy.

Loquats are distantly related to quinces and apples. They’re easy to grow in the Waikato.

Loquat, Eriobotrya japonica, is a large evergreen shrub or tree from the Rosaceae or rose family. It’s originally from the cooler hill regions of south-central China.

Loquats are one of the many foods that don’t fit into the commercial food economy of Aotearoa-New Zealand.

The only way you can eat loquats is for free. And the best way to eat them is straight off the tree.

If it’s not your tree, please ask the property owners if you can have some. Here’s more about foraging etiquette.

Loquats don’t keep well after being picked. Although you could pick a small branch of fruit and bring it inside to the fruit bowl, instead of picking the fruit individually.

You won’t find loquats in a supermarket, at a fruit shop, or even at the local farmers’ market. I’m pretty sure they’re not grown commercially in this country.

According to Wikipedia loquats are grown commercially in Asia and the Mediterranean.

Loquats have a short fruiting season, in spring, at a time of the year when there isn’t much other seasonal fruit.

I’ve noticed that different loquat trees in my neighbourhood have different fruiting times, from late October to December, depending on the tree and its location.

Food plant specialist Dr Susanna Lyle comments about the loquat: “Its popularity is not as great as one would expect for a tree of its versatility, attractiveness, minimum maintenance requirements and abundant fruits.” “Discovering Fruit and Nuts: a comprehensive guide to the cultivation, uses and health benefits of over 300 food producing plants” (David Bateman, 2006).

The fruit and leaves of the loquat tree are greatly valued in traditional Chinese herbal medicine.

Above: loquat clusters on the huge loquat tree in our driveway.

How to grow loquats

Our loquat tree is probably at least 50 years old.  I don’t know what variety it is.  In the 1950s and 1960s loquats were often planted in New Zealand suburban gardens as ornamental trees.

The trees are often self-fertile, but they will produce more fruit when there are other trees in the neighbourhood to act as pollinators.

Loquat flowers are frost-sensitive. If there are frosts around the time the tree is flowering, in late autumn and early winter, there won’t be many fruit.

You can buy loquat trees from fruit specialists, e.g. Incredible Edibles, and also some garden centres.

I’ve heard from Treecrops Association members that grafting a loquat on a quince rootstock is a good way to get a tree that doesn’t grow too big.

The local Waikato Treecrops Association group is a great place to get advice about all kinds of fruit trees.

Loquats also grow easily from pips, self-seeded by birds. But like apples and avocados, when grown from a pip, the new tree may be very different from the parent tree. I’ve found loquat trees that are laden with pretty fruit, which don’t taste nearly as good as the ones in my garden.

Some varieties of loquat may be bred to be ornamental, rather than having tasty fruit. 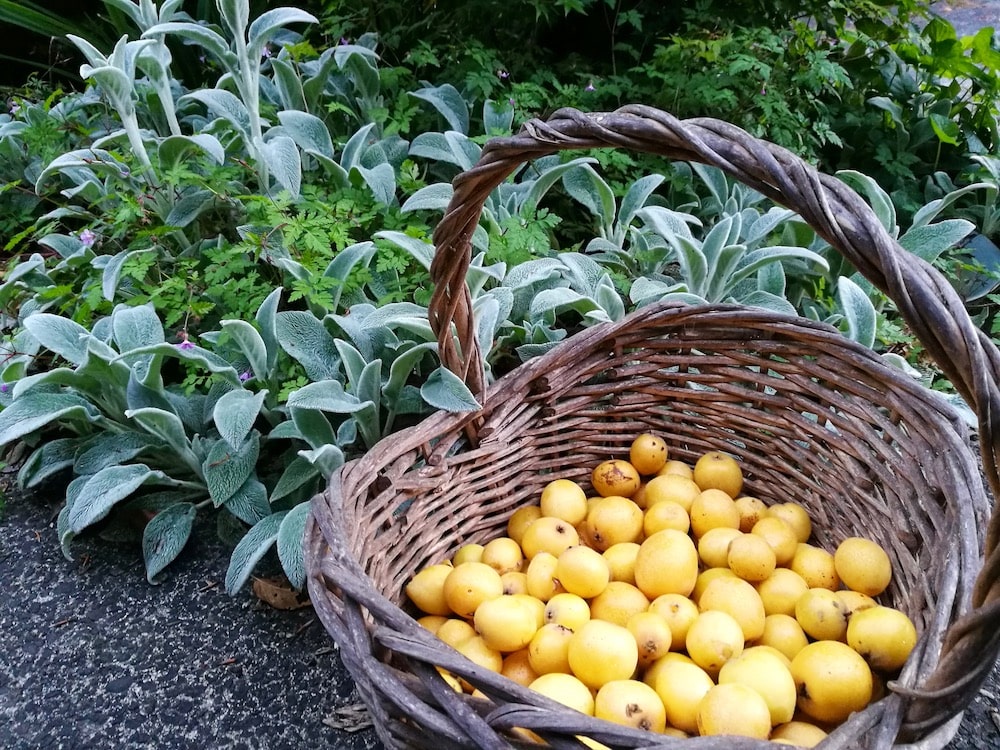 Above: Loquats waiting to be turned into chutney. They don’t keep well after being picked.

Loquats are beloved by many birds, both native and introduced. Kereru are particularly fond of loquats.

According to Weedbusters, bird-sown loquat trees can be a pest in native bush areas, displacing native trees. However, they said loquats aren’t hard to eradicate.

I’m happy to share the loquats on my tree with neighbourhood birds. I pick the low-hanging fruit and they can feast on the fruit high up in the canopy.

The latest issue of the Treecropper also has a thought-provoking article about birds and fruit trees, by Treecrops Association national president David Whyte, who has a citrus orchard in Ohinewai.

Have I persuaded you to join the Treecrops Association yet? It’s a bargain. $50 for annual membership.

How to eat loquats

The best way to eat loquats is straight off the tree, a few at a time, as you wander past.

I enjoy three or four loquats in a bowl of Caspian sea yoghurt for breakfast. 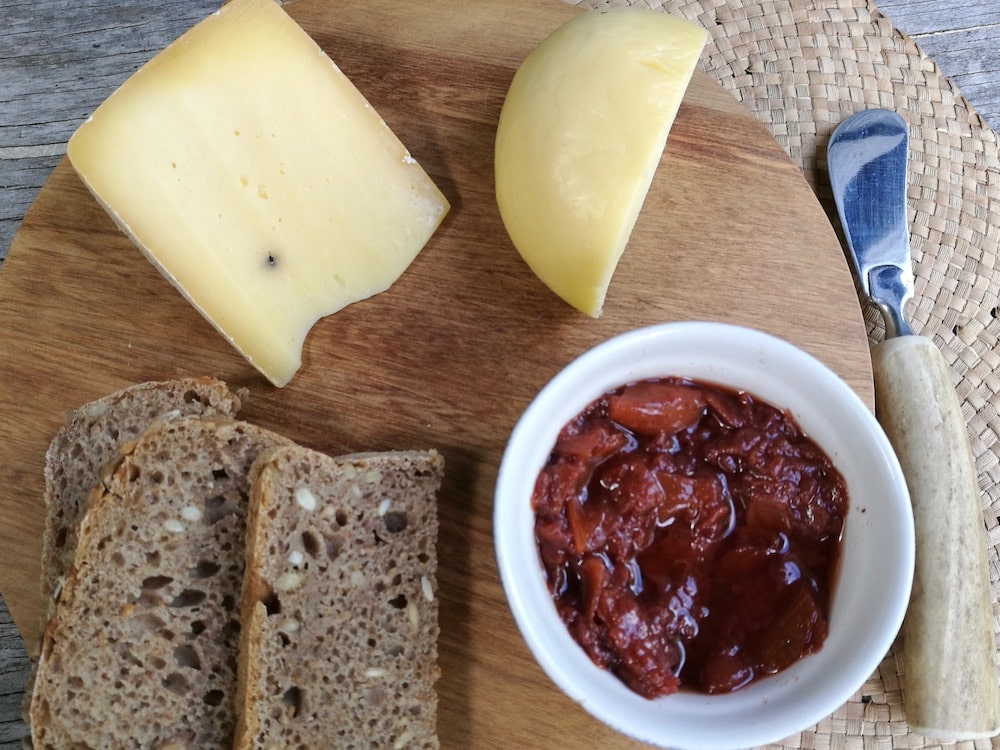 Above: loquat chutney is a beautiful rusty red. It goes well with bread and cheese. Shown here: sourdough bread from the German Baker at Hamilton Farmers’ Market, and Italian-style Scamorza and Smooth Hunter cheeses made by Dream Cheese, also at the farmers’ market.

Loquats are quite fiddly to prepare for cooking. Not difficult, but not totally quick and easy. Each individual fruit contains two or three stones. There is almost as much stone as flesh.

I’ve found that the quickest way to prepare loquats is to pinch or slice off the bud end, and squeeze out the stones or pips. Make sure you get all the pips out.

I don’t both about peeling loquats.

This is a beautiful orange-red chutney, which is strange, because ripe loquats are bright yellow.

It goes well with cheese and sourdough bread. See the photos .

8 cups of loquats – measure after removing stones and the bud end, but don’t worry about peeling

2 1/2 cups apple cider vinegar – I still have a good supply made from last summer’s windfall apples.

3 cups sugar – I used Trade Aid sugar, which is fairtrade and certified organic

Place all ingredients in a big saucepan and simmer slowly until the chutney is thick. This will take at least two or three hours. The longer the better. 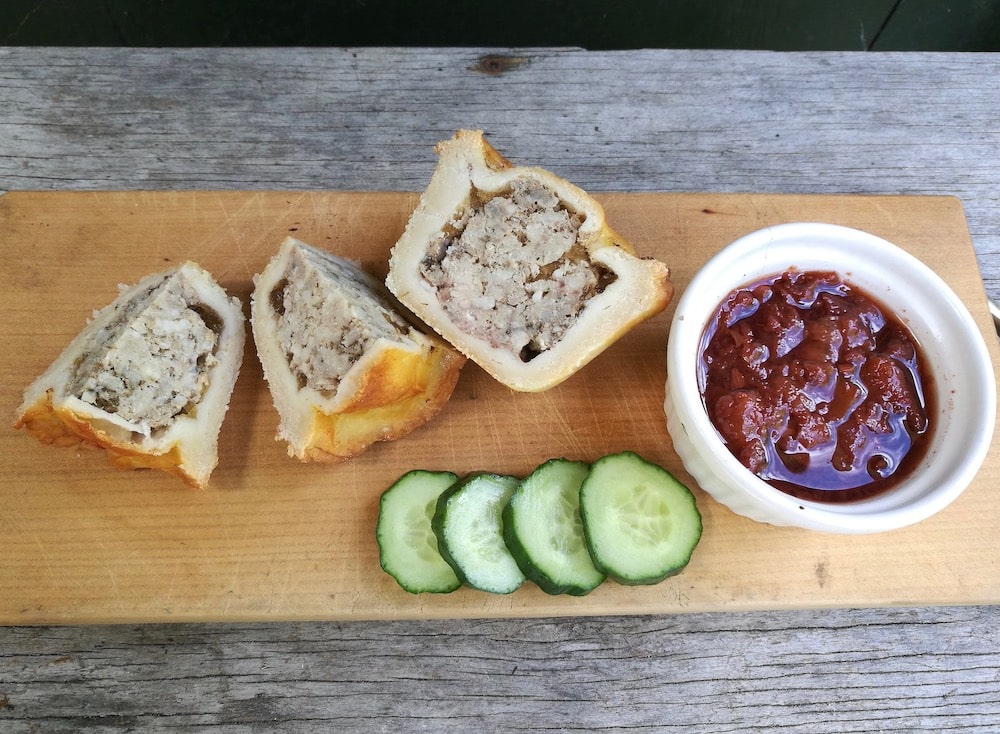 Above: Another great use of loquat chutney. Traditional English-style pork pies from Soggy Bottom Holdings, at Hamilton Farmers’ Market.

This is a variation on Damson Gin. It’s a beautiful gold colour, with a subtle, fruity flavour. It goes well with crushed ice and a splash of ginger syrup.

Prick loquats with a fork.

Add sugar and pour in vodka or gin to cover.

Screw on lid tightly and shake the jar well.

Leave as long as you can before drinking – ideally 2 months.

Growing fruit all year round

How to make apple cider vinegar

Foraging in the Waikato