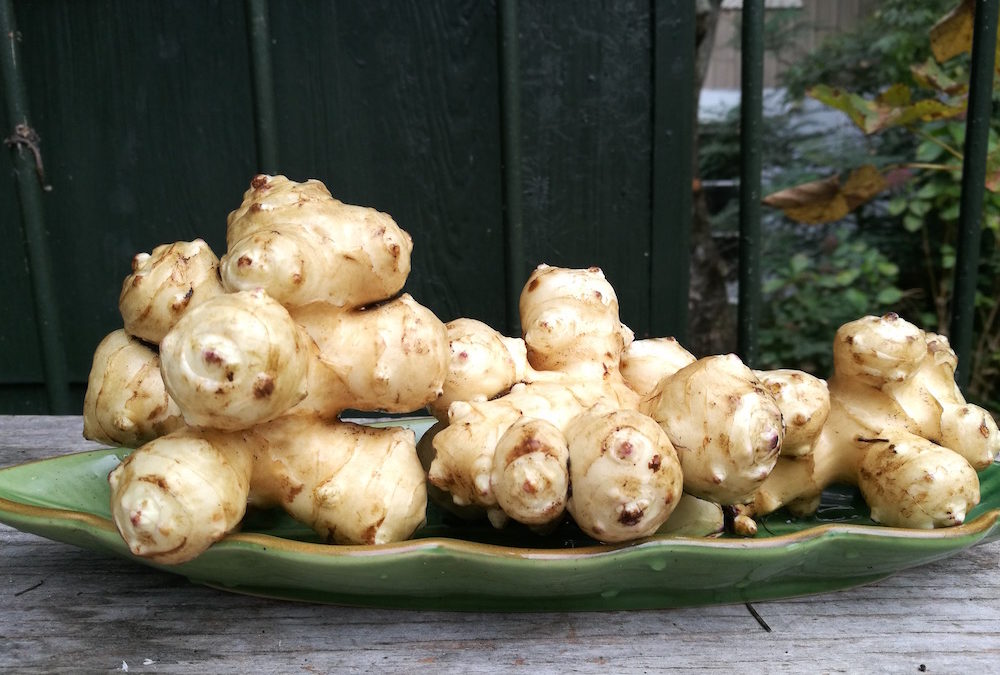 This week I’ve been enjoying a big bag of Jerusalem artichokes. Readers of this blog may be aware that I’m partial to weird vegetables. I’ve discovered that many people haven’t tried the interesting and delicious Jerusalem artichoke.

The artichokes came from my friend Deborah Brown, who with her husband Craig has a dairy farm near Morrinsville.

Three generations of Browns live on the farm: Craig and Deborah’s elder son Dylan milks the cows, while Nathan is planting food forests of fruit and nut trees and growing vegetable crops both for local food suppliers and seed. He grew the artichokes (thanks, Nathan!). The youngest Brown family member is Dylan’s 18 month old daughter Lunar. 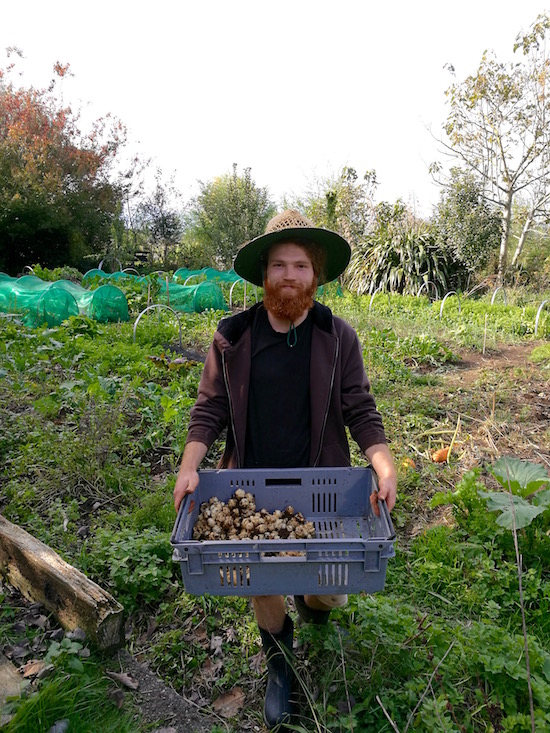 One day soon I’ll write a post about how the Farmer Browns are working towards a system of regenerative agriculture which is sustainable for dairy farming. It’s a fascinating and important topic! 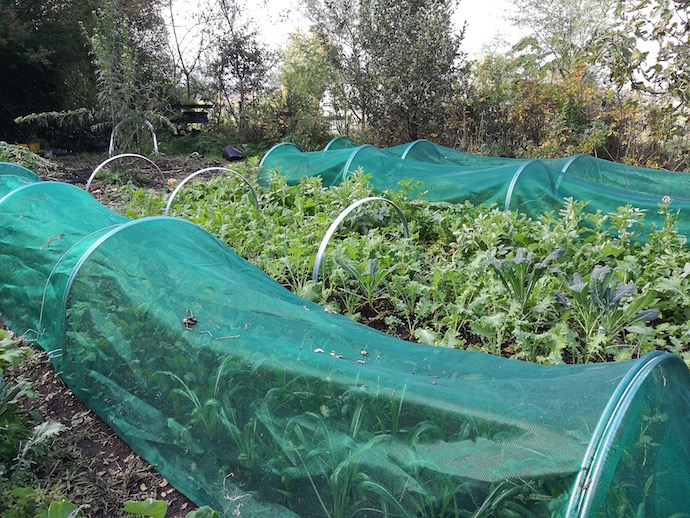 Some of Nathan’s flourishing brassicas.

Two very different vegetable are both called artichoke: there’s Jerusalem artichokes, Helianthus tuberosa, and there’s globe artichokes, Cynara cardunculus var. scolymus. Globe artichokes are a kind of giant, non-spiny thistle, and the part that is eaten is the flower bud. (I love globe artichokes. Here’s a link to my post about them.)

Jerusalem artichokes are quite a different plant. The part that is eaten is the underground tuber. Both these vegetables are called artichokes because they share a slightly similar earthy, delicate flavour.

Globe artichokes are European-Mediterranean, while Jerusalem artichokes originate in the eastern part of North America. Italian settlers in the United States called the plant “girasole”, because of the yellow flowers. Girasole is Italian for sunflower. It’s thought that “Jerusalem” is a mispronunciation of this. Another common name for Jerusalem artichokes is sunchokes. 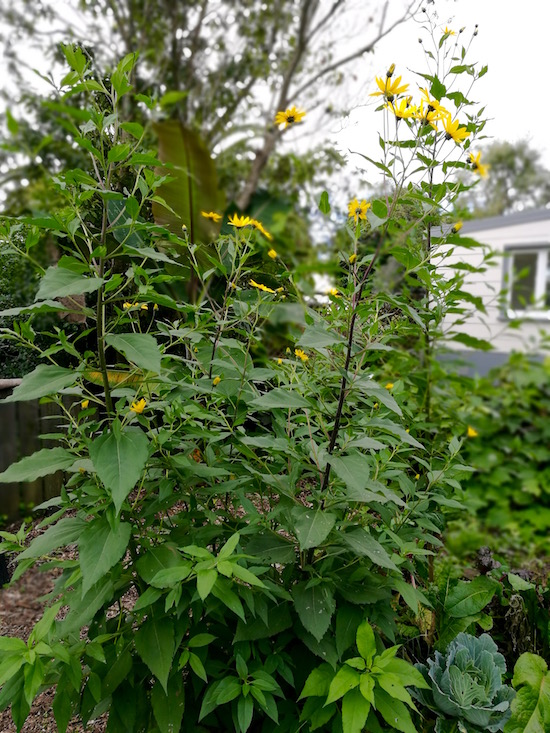 Above: Jerusalem artichoke plants – they can grow 3 metres high!

English food writers (in particular) rave about Jerusalem artichokes. Hugh Fearnley-Whittingstall describes the flavour as “sweet and nutty, with a hint of oyster and a dash of soil.”

Jerusalem artichokes are sometimes also called “fartichokes”. And yes, these artichokes may cause some people to produce wind. Especially when eaten in large quantities. My unscientific and personal research suggests that this is more of a problem with older people – not so much with kids and young adults.

My solution is to combine Jerusalem artichokes with other vegetables to minimize repercussions. I wouldn’t eat a whole meal of them, on their own. And slow cooking also seems to help.

Jerusalem artichokes contain inulin, which is a kind of fibre that has been found to be great for promoting healthy intestinal flora activity.

Where to find artichokes

We used to get them regularly when we had a weekly vege box delivery.

The best way to get a supply of Jerusalem artichokes is to grow them yourself, or find a gardener who has some to spare.

They’re easy to grow, and they have pretty yellow flowers. However, they need a sunny spot and they take up a lot of space. Fully grown Jerusalem artichoke plants can be three metres high! My current garden just isn’t sunny or big enough.

The tubers are ready to harvest at the end of summer. They can be left in the ground after the tops die down, and dug up when required. That’s a good way to keep them fresh, although they may be nibbled by slugs. However, you may also lose them in the ground, and they’ll sprout next season and crowd out other crops.

Other people suggest storing Jerusalem artichokes in a tub of compost in a cool dry place. Save some of the best tubers to plant in the spring.

You don’t need to peel Jerusalem artichokes. They are so knobbly that this is difficult to do anyway. Just wash off the dirt and trim away any soft or discoloured bits.

My favourite way to eat Jerusalem artichokes is pan roasted with other vegetables: chunks of pumpkin, shallots or sliced onions, Jerusalem artichokes, plus a few sprigs of thyme and a splash of extra-virgin olive oil. Pan roast in a hot oven 200 degC for about half an hour. 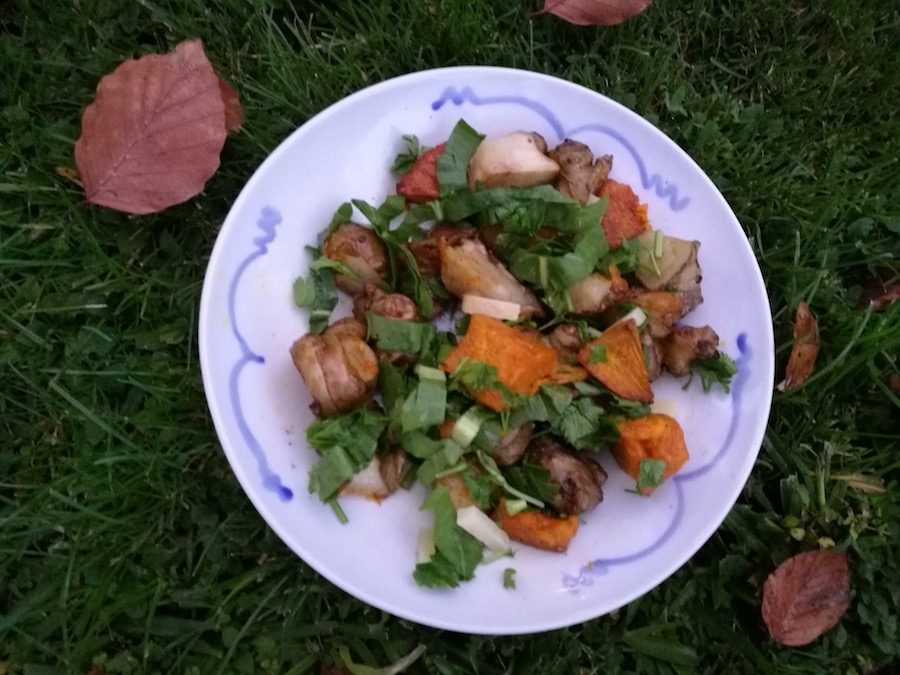 Above: a warm salad of roasted jerusalem artichokes, pumpkin and seasonal greens.

Jerusalem artichokes make lovely oven fries or wedges, cooked in the same way as potatoes. They’re a bit sweeter and softer than potatoes.

You can cook Jerusalem artichokes pretty much any way you would potatoes. Boiled and mashed with half artichokes, half potatoes is good.

Unlike potatoes, Jerusalem artichokes can be eaten raw. They have a lovely crunchy texture, similar to water chestnuts. They don’t discolour and they keep their texture.

They can be included in a coleslaw or Asian-style salad to give crunch. However they’re pretty neutral in flavour. I would just add one or two, thinly sliced or grated.

Artichokes are great in a winter vegetable soup.

Artichokes and potato in equal quantities, a big leek, an onion and two cloves of garlic.

Slice all the veges and place in a slow cooker with 2 litres of chicken or vegetable stock.

Cook until tender. Blend or puree the soup.

Serve with a dash of cream and a sprinkle of finely chopped parsley.