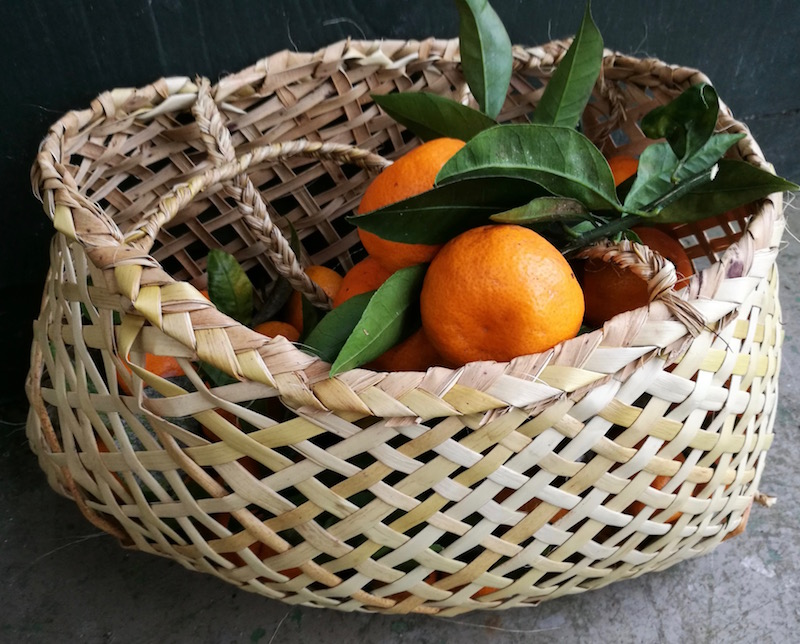 I’ve just come home with a bag of superbly ripe mandarins. And they were free.

My friends Melissa and David have a huge mandarin tree, which produces far more than their family can eat. It’s having a bumper year.

I love foraging. Otherwise known as getting food for free.

All year round there’s large quantities of seasonal fruit dropping off trees and not being eaten. Some of this is on private property and some is on public land.

Finding ways to easily redistribute the surplus makes a lot of sense. Some of the local organisations working in this area include Community Fruit Hamilton, food banks and the food rescue service Kaivolution.

There are also various less formal food redistribution networks, including pataka kai – neighbourhood food cupboards. Here’s an article with more about these.

And there are neighbourhood swap and share tables, e.g. there’s one in Claude Rd, Claudelands.

We think of food as something we buy, if we haven’t grown ourselves. With the notable exception of hunting, fishing and shellfish gathering.

When we forage we become connected to the seasonal cycles.

Most foraged bounty is only available at certain times of year.

Foraging harkens back to our hunter-gatherer origins, as local treecrops specialist Maxine Fraser has commented.

Our national economy is based on producing food for export. Here’s my post about the local food economy in New Zealand. I wrote it a while back but it’s still relevant.

New Zealand doesn’t have clear rules or guidelines around gathering food from common places. Apart from the hunting, fishing and shellfish gathering rules.

I think we need to develop some guidelines, protocols, ways of being around foraging. And also, in a more general sense, around anything that appears to be “free”.

Because there’s always a value, a cost to something.

This will take time and experience. It’s not a matter of setting up a legal structure. What works will vary from place to place.

I think, personally, the place to start is to establish a relationship, a connection. Even if it feels strange to speak to someone I don’t know, to ask if I can take a couple of lemons from their tree.

In a culture where everything has a monetary value (including the environment), getting something for free is countercultural. It makes us feel uncomfortable.

I’ve noticed this discomfort when I give away (non-food) items on the Freecycle website.

Not everybody is like this, but it’s happened frequently enough for me to be put off using Freecycle. Some of the rudest people I’ve encountered appeared to be middle-class.

I’ve found the Waikato Time Bank a better way to redistribute items, because there is a clear contribution from both parties in the exchange.

Time Banking is an international movement. It was founded in 1980 by American lawyer and social activist Edgar Kahn, author of No More Throw-away People. His aim was to provide a mechanism for valuing work in the non-monetary parts of the economy.

Some of the stated purposes of the Time Bank movement include rebuilding social capital, redefining work, and building connections within communities.

Here’s a link to find out more about our local Waikato Time Bank.

Johanna Knox, author of A Forager’s Treasury (Allen & Unwin, 2013) – a New Zealand classic, and a very interesting book – has the following suggestions:

Don’t take anything from national parks or marine reserves, unless you have obtained a permit.

Don’t go onto private property, including farmland, without the owner’s permission.

In local parks, she suggests checking with local councils because the rules vary in different places.

A tree that’s hanging over a fence into a public park clearly belongs to the property owner.

I know people who have fruit trees along a fence bordering a park. They get very upset when people reach over the fence to pick their apples. That’s clearly theft, if it is done without the owner’s permission.

If the fruit has fallen on the ground in the park, it still legally belongs to the owner of the tree.

Ask the owner if you can take some fruit.

Even if they don’t seem to be using the fruit, they may not want to give it away. When I asked an elderly neighbour if I could have some of his crab-apples, he said he was leaving the fruit for the birds.

Pick the fruit carefully, so you don’t damage the tree.

With mandarins, use secateurs to snip the fruit. If you pull mandarins off by hand, you’ll leave a chunk of peel to rot on the tree.

Don’t strip the tree. Unless you and the owner have explicitly agreed that this is what you are going to do.

Ask permission every time you pick fruit. David, who owns the abundant mandarin tree, said some people have assumed that they only have to ask once, and they have come back and taken without asking.

Say a clear thank you. If you’re able, give something in return. Even just a thank you note.

A tangelo tree will be laden with bright orange fruit in August. But they’re not sweet and ripe. Tangelos don’t fully ripen until November, when the fruit starts fading to yellow.

Don’t encourage your children to pick fruit without asking.

Despite the official attitude that trees on public land should be attractive rather than productive, there are food-producing trees in parks all over the Waikato.

Here’s a link to a local foragers’ map which was drawn up a few years ago. It probably needs updating.

Community gardens and community orchards will have a variety of guidelines around whether food can be taken, and by who. Contact the organisers to find out what the guidelines are.

Fruit trees can be amazingly productive. If you plant them well, in the right place, they easily repay your investment quite quickly.

Here’s a link to a book Clare Jackson and I co-wrote, Fast Forward Your Home Orchard, about how to plant and care for fruit trees.

The flip side of this is that when the trees are producing abundantly you may have far more than you need.

So, gear up to share, swap or sell the surplus!