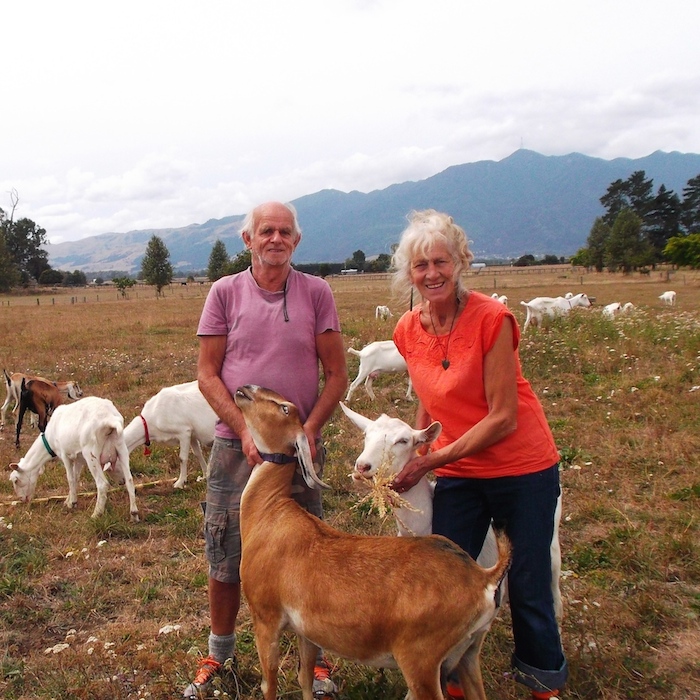 A small farm near Mt Te Aroha is home to one of New Zealand’s top cheese makers.

Above: John and Jeanne van Kuyk, with Cherry Blossom (Anglo-Nubian) and Sophie (Saanen). Mt Te Aroha is in the background.

John and Jeanne van Kuyk keep goats, milk them and produce cheese from the milk. They are pioneers in at least three fields: organic dairy goat farming; small-scale cheese making; and they are the first in the country to be certified to produce and sell cheese from raw milk.

The goats are also champions – there’s a row of ribbons from recent shows in the milking shed. 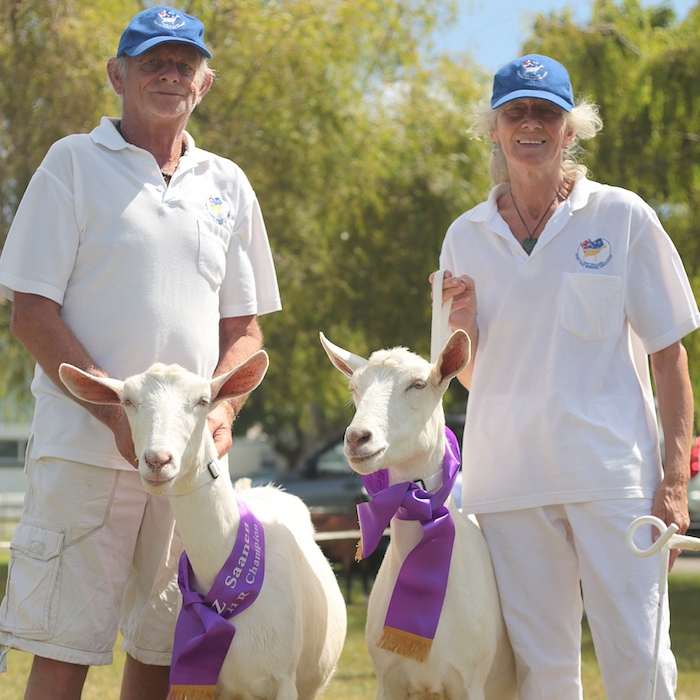 On their 50-acre farm John and Jeanne have a herd of 53 does, a mixture of snowy white Saanens and brown Anglo-Nubians with long floppy ears. In the autumn drought, John and Jeanne’s “girls” are very happy. Hot, dry weather suits goats, says Jeanne. Goats hate cold wet weather. And even though the pasture has dried up, there’s plenty of goat food. They eat hay and browse on willow and poplar. They aren’t fed grain, except for a small treat at milking time. “We believe that a green diet is better for the acid-alkali balance in the goats and therefore in the quality of the milk,” Jeanne says.

It’s a small-scale farm and almost everything is hands-on and low-tech. That’s the way John and Jeanne like it. The only time the goats and milk come into contact with electricity is in the milking shed, where there is a small mobile milking unit. They’re not against electricity – they have it in the farmhouse – but they think there’s too much electrical pollution in our lives, and believe it causes many health problems.

Having a smaller herd of goats makes it easier to keep them in good health using organic methods, John says. Each goat has a name and is known individually. Every day the “girls” get a dose of herbal drench – a mixture of cider vinegar, molasses and herbs. Any goat looking slightly out of sorts will also get freshly made yoghurt – “they love it”.

The milking shed is incredibly clean and fresh-smelling, and there’s no need to hose out the floor repeatedly. That’s one of the big differences between goats and cows, John says. “No mess.” The goats are milked twice a day, first thing in the morning and at five o’clock. They produce on average five to six litres of milk per day.

Jeanne makes traditional Dutch Gouda, in ten flavours, from plain to herbal flavours, like cumin or nettle, and a “Nutty Nanny” walnut cheese. Only vegetarian rennet is used. John and Jeanne don’t eat meat, and they say animal welfare is a big concern for many of their customers. 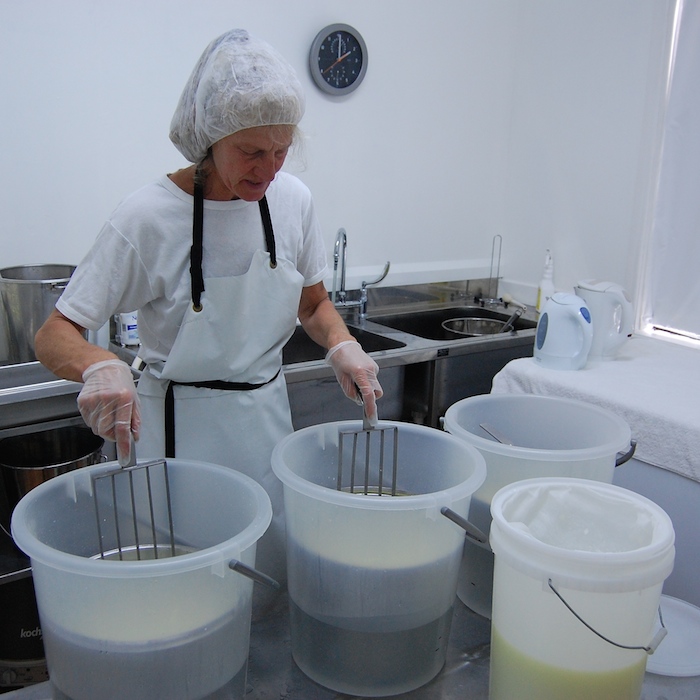 Above: Jeanne makes her cheese by hand. This photo and the previous photo courtesy of Jeanne and John van Kuyk.

Sixty litres of milk produces six large cheeses, or twelve smaller ones, all in the classic round shape. Jeanne produces both raw and pasteurised milk cheese. The raw milk cheese comes out smaller, because it is cured for longer. It is more expensive because of the costly lab tests.

The cheese is in huge demand – there’s already a waiting list for next season. They sell it mostly through their website.

They also sell raw milk at the farm gate, but currently with the drought there’s none to spare.

Since late 2012 Jeanne is the first and currently the only producer in the country making raw milk cheese. The approval process took two and a half years. “MPI were writing the regulations as we went through.” Some of the regulations were adapted from Europe, where raw milk products are normal and traditional.

“It has always been our ultimate dream and goal to produce raw milk goat cheese,” Jeanne says. Pasteurisation kills harmful bacteria – but also destroys many beneficial components, she says. “I really believe there’s no need for fear with raw milk. It starts with healthy pasture, healthy goats and top hygiene in the dairy shed and cheese area.”

A longer article about John and Jeanne van Kuyk and their goats appears in the May-June 2014 issue of Organic NZ magazine.