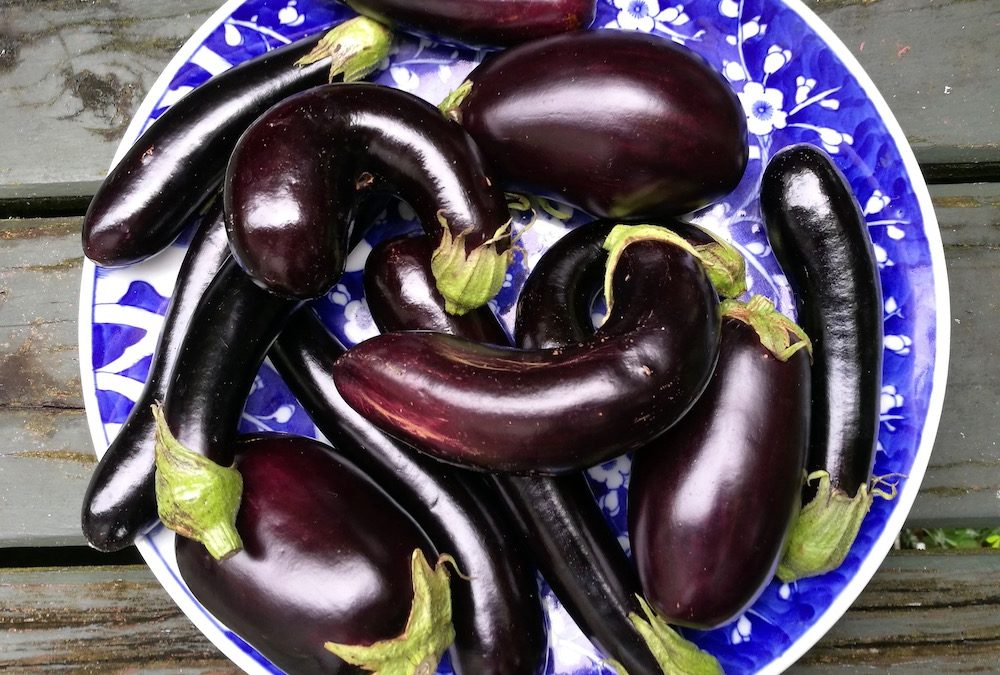 I think eggplants are the most elegant of all vegetables. These beautiful shiny purple vegetables/fruit, which are also often called aubergines, star in some of my favourite recipes.

Eggplants are abundant in local farmer’s markets at the end of a long hot Waikato summer.

An enduring memory of my brief visit to Rome was an antipasto table featuring eggplant (melanzane in Italian) prepared in five delicious ways.

I know that many people don’t appreciate eggplants. I think this is partly because eggplants can be pretty unappetising, when they’re not cooked with care and appreciation.

My mother, Sue, didn’t know how to make the best of eggplants. Although she was a pretty good cook in most respects. When I was little, some of our family meals were marred by my refusal to eat her “slimy yucky” eggplant.

Eggplants thrive in the warmer climates of the Mediterranean, the Middle East,  India and South-East Asia. There are many great eggplant recipes from cultures in those regions.

Probably the best-known eggplant dishes are moussaka and eggplant parmigiana. These are superb special occasion meals.

Properly made moussaka and eggplant parmigiana both take well over an hour of preparation (not counting cooking time) and lots of rich ingredients, including eggs and good quality cheese.

These are my five favourite eggplant recipes.

None of these recipes is hugely time consuming.

Make this ahead of time – it tastes even better the next day.

You need a couple of big eggplants.

To cook the cubes, either place in a shallow oven pan and bake in a medium oven until they are soft but not mushy. Or, cook in a heavy frying pan or a wok on a medium heat. If using a frying pan, cook the eggplant cubes in two or three batches.

When cooked, place the eggplant cubes in a large bowl and add dressing and some torn up basil leaves – a handful if you have lots of basil, but just a couple of leaves will make a difference.

Put a small bowl of this delectable pickle on the table with any Asian-style meal.

This is adapted from a recipe in Home Style Korean Cookery by Cho Joong Ok.

10 small eggplants, or a couple of big ones

Place the eggplant strips in salt water for 1 hour.

Squeeze and drain the eggplant, but don’t rinse.

Mix together in a bowl:

Place eggplant in a 1 litre glass jar and pour the other ingredients over the top.

Press the eggplant down with a fork. Add a bit more soy sauce if there isn’t enough liquid to cover the eggplant.

Screw a lid on the jar. Let stand one night and then serve. It’s even better after a few days.

This pickle keeps for at least a couple of weeks in the fridge.

Prick eggplant in several places and bake in a hot oven (200 degC) for 30 – 45 minutes or until soft. Remove stems and peel.

Mash flesh with tahini and garlic.

Optional: use yoghurt instead of tahini

This is an easy, quick vegetarian main dish. The batter has no eggs or milk. For a gluten-free version, I am planning to try it with chick-pea flour from Bin Inn.

I found this recipe in Dinner at Home, by Lois Daish, who used to write for The Listener. She says it’s originally from northern India.

The batter contains turmeric and baking soda, and the fritters turn a beautiful rusty red when cooked. (I don’t understand the chemistry behind this, because normally turmeric turns food yellow.)

1 cup white flour, or half white and half wholemeal

1 large aubergine, or a couple of smaller ones

Place flour, baking soda, salt and turmeric in a bowl. Whisk in enough water to make a batter the consistency of lightly beaten cream. Set aside for 15 minutes.

Wash and dry the aubergine, then cut into rings the thickness of a $1 coin, i.e. not too thin but not too thick either.

Heat enough oil in a frying pan to cover the bottom generously.

Dip the aubergine rings in the batter and fry for a couple of minutes on each side.

If the eggplant hasn’t become soft inside the batter, keep cooking for a few more minutes.

This is enough for 2 or 3 people, depending on the size of the eggplant.

Goes well with rice, salad and chutney or yoghurt for a sauce.

This Provencal dish of vegetables stewed in olive oil is usually served hot with rice or bread. It can also be eaten cold as an hors d’oeuvre.

1 tsp coriander seeds, crushed roughly in a pestle and mortar

Olive oil – at least ¼ cup. You need lots. The oil is important in this dish.

Warm the olive oil in a heavy frying pan.

Chop the onions fine and cook gently in the oil for about 10 minutes.