I went for a cup of tea with my friend Clare Jackson and came home with a kilo of beautiful, freshly picked redcurrants and a challenge. “I want to see what you do with them,” she said.

Redcurrants are ripe at Christmas here in Hamilton. They’re a Christmassy sort of colour and shape. I’ve never found them in a New Zealand supermarket, or even in fruit shops. Maybe in farmers’ markets in Europe.

Clare’s single redcurrant bush is about 10 years old. It grows happily in a shady spot under a plum tree, and produces heaps of fruit, year after year. Clare has the whole bush carefully draped in netting to keep off the birds. Redcurrants are so sour that most people won’t want to eat more than a few “as is”, but birds don’t seem to mind.

It’s not as heavily laden as a European redcurrant bush might be, because of the milder climate, but there are still plenty. 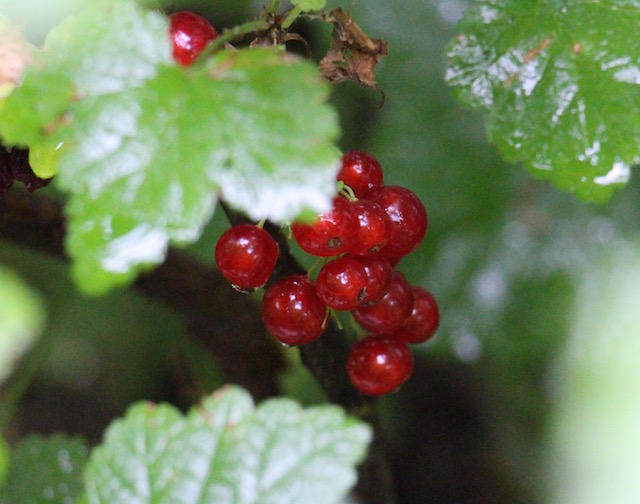 Gorgeous redcurrants, just waiting to be eaten. Photos by Elizabeth Newton-Jackson. Mince pies in the photo at the top of the page by Clare.

Here’s what I did with the redcurrants:

This tastes like a very classy BLT, my son Albert remarked. The redcurrants are very pretty on top of the green leaves. It’s a common salad in many parts of Europe, which is where redcurrants come from.

Two or three rashers of Soggy Bottom bacon from the Hamilton Farmers’ Market, cooked and snipped into chunks

A handful of redcurrants. (One recipe I found suggested using 100g of redcurrants. I think this is too many, because they are very sour.  You just need a few for each person.)

Tear the greens into bite-sized pieces and place in a salad bowl. Top with bacon pieces.

Toss salad with a vinaigrette made from olive oil and balsamic vinegar, with a pinch of mustard and salt and pepper. The dressing needs to be fairly sweet, to balance the sourness of the redcurrants.

Sprinkle a handful of redcurrants over the top. (If you put them in earlier they will end up at the bottom of the bowl.)

Variations: instead of bacon, you could use pieces of good quality European sausage (such as The Organic Butchery sells). Or pieces of fried halloumi cheese from Cilantro (also at Hamilton Farmers’ Market).

We’re having this beautiful pink drink on Christmas day.

This recipe came from Quinta do Vale’s Permaculturing in Portugal blog. (She also recommends making redcurrant icecream, but I ran out of redcurrants before I got that far.)

Put 500g redcurrants in a large bowl. Use a potato masher to break up the redcurrants a bit. Add the juice of half a lemon and the other half of the lemon, thinly sliced. Add 2 litres of water. Cover with a clean tea towel and leave to stand at room temperature for 24 hours.

Strain the fruit water into the sugar water, stir, then pour into plastic soda bottles (they won’t explode with the pressure). The fermentation will take off almost immediately.

Keep at room temperature until the fermentation has peaked and calmed down a bit – five days or so. Release the pressure build-up as required – you’ll need to do it 2-3 times a day at least.

The soda will keep in the fridge for a few weeks – the cold will slow the fermentation down.

I’m not a very experienced jelly maker, but this recipe worked for me.

It’s from Delia Smith, who says she got it from Eliza Acton’s 1840 classic Modern Cookery for Private Families.

It was great with the Christmas roast duck.

Place the washed fruit – stalks and all – in a preserving pan, bring slowly to the boil and stir, pressing the redcurrants to break down the fruit and release the juice.

As soon as the fruit is cooked (about 10 minutes), add the sugar, stir until absolutely dissolved, then bring the mixture up to a rapid boil, and boil for 8 minutes. Meanwhile, place a large nylon sieve over a bowl and line it with cheesecloth.

When the 8 minutes are up, tip the whole lot into the sieve and let it drip through. If you don’t mind not having a completely clear jelly, you can press to extract as much as possible.

Pour the jelly into jars, which have been washed, dried and heated in a moderate oven for 5 minutes. Seal while still hot.