Soggy Bottom: where the bacon begins 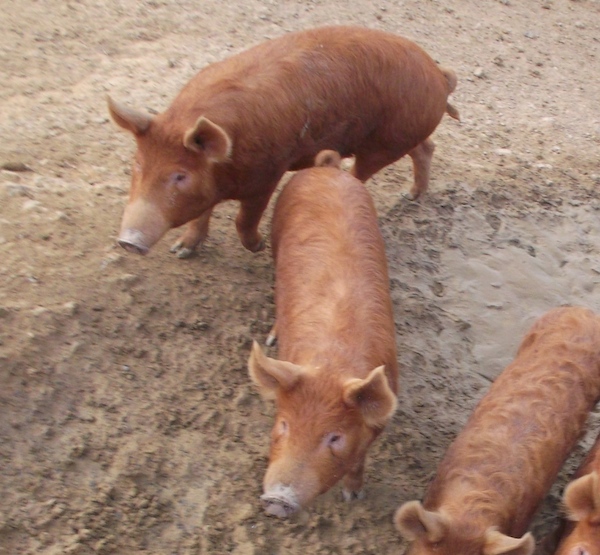 On a sunny Sunday afternoon in midwinter I went to find out where my bacon comes from. I joined up with 25 members of the Treecrops Association to visit Soggy Bottom, the small farm where Jonathan and Sarah Walker raise free-range rare breed pigs, cows and chickens and make the most delicious bacon, sausages and other carnivorous delights for the Waikato Farmers’ Markets.

We started out with a shared lunch, sampling some of Jonathan’s sausages – a choice between pork and apple, and a gluten-free pork, chestnut, quince and mushroom. Divine!

Ten years ago these English migrants bought 60 acres of rough, hilly land south of Ngaruawahia, which used to be part of a sheep farm. They weren’t sure what they were going to do with it initially. One pig became three, and three became five, and then five became twenty. Jonathan (a forester by trade) was making a living doing portable sawmill work and chainsaw training.

And then they saw a notice in the paper, that a farmers’ market was starting in Hamilton. At the first market they sold out within half an hour. “…and it’s been downhill all the way since then,” jokes Jonathan. Six months later the butcher who was making the bacon and sausages closed down. Jono decided to learn how to do it himself. 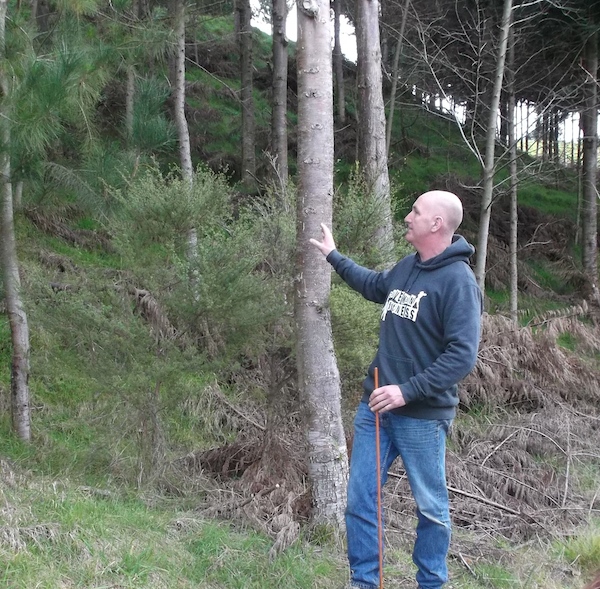 After lunch we set off on a walk around the property, to work off all those sausages. It’s a beautiful hilly landscape, with many trees. You can tell that Jono loves and understands trees. (The Treecrops people were asking a lot of tree-related questions.) There are scores of young apple trees (he uses a lot of apples in his sausages), including Bramleys (an old cooking apple) and many heritage varieties such as Peasgood Nonesuch. There are also hazels, feijoas, cherry, ash, eucalypts, Japanese cedar, sugar maple, redwoods, pinon (pine-nut) trees and four or five different kinds of oak. “My longterm ambition is to grow truffles,” says Jono.

Perched on the side of the hill overlooking the biggest pond there’s a sleepout, where Wwoofers (Willing Workers On Organic Farms) stay. They help Jono on the farm, in the butchery and at the market. (Sarah works as a nurse at Waikato Hospital.) The Woofers usually come for two weeks and end up staying several months. “We work them really hard, and we feed them up with great meat.”

Just past the flourishing clumps of banana palms, we encounter some of the “baconers”: a bunch of hairy brown Tamworth pigs snuffling around in a paddock. 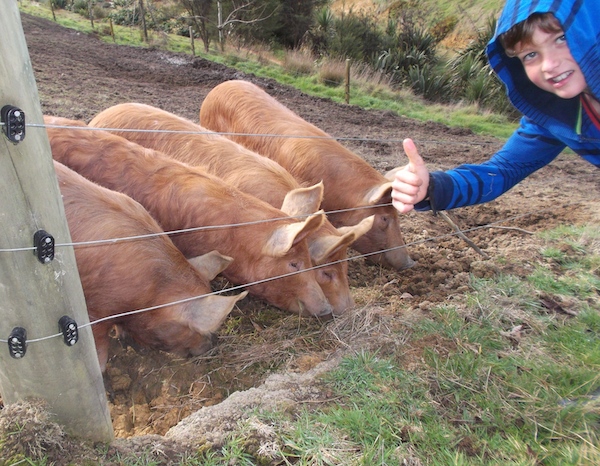 At this time of the year (mid-winter) the pigs have dug everything up and reduced the paddocks to bare soil. “It’s not ideal land for pigs, it’s too steep and clay,” Jono says. He’s planning to put the pigs in the half-round barn for a couple of months over the wettest part of the winter, to give the grass a chance.

Soggy Bottom specializes in rare breed pigs – Tamworths and Saddlebacks, which are black, usually with a white “saddle” marking across them. Tamworths are pretty close genetically to European wild boar, Jono says. They thrive outdoors and they produce meat that’s far better quality than factory farm pigs. There’s also a small herd of Belted Galloway cows (keeping the black and white theme), a heritage breed that is small and goes well on hills.

Jono has tried sheep, “but I’ve never learned to love them”. The Waikato isn’t a good place for raising sheep organically, he says. It’s too damp. He buys in lamb from other farms to make sausages. He also raises chickens for meat. They take six weeks to grow: two weeks inside, then four weeks outside on pasture in a moveable pen.

Soggy Bottom meats have been a highlight of my family’s diet for several years, and I was really pleased to see the farm and find out more about the pigs and how they are cared for. For me, it’s an important part of being a meat eater.

But right now, I’m going to make myself a bacon sandwich.