Raw milk: the road gets longer 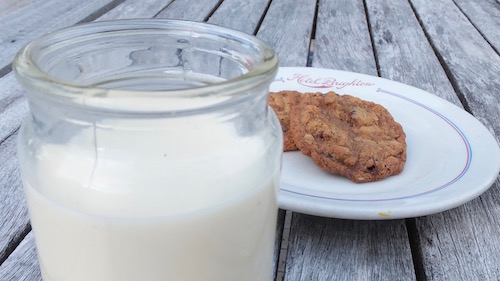 I’m sad to report that we picked up the last delivery of raw milk today. We’ve been happily drinking Right Choice Live Milk for the last couple of years. We’ve paid for it in advance and it has been delivered once a week to our local Gouda Cheese Shop.

However, this weekend the new Food Safety regulations come into force. This means that the current delivery arrangement is no longer legal.

From now on, consumers of raw milk will have to collect it directly from the farm. I’ve done this in the past, but it’s too time-consuming for me to manage regularly.

The local raw milk suppliers I’ve spoken to say that the new regulations are going to make it much more expensive and complicated for small producers. There are many new compliance costs, including far more extensive and expensive testing. This will make supplying raw milk legally at a reasonable price increasingly difficult.

I have never heard of any health problems arising from raw milk supply with the previous regulations.

Kaye and Peter Roskam from Right Choice Live Milk have said they are taking a month’s break while they figure out if (and how) they can comply with the new regulations and continue to supply raw milk commercially.

One rule for large and small producers

In Europe, raw milk is considered a traditional, normal and healthy food. But in New Zealand, with our huge, high-tech global milk industry, small-scale production of raw milk is falling between the cracks.

I don’t dispute that hygiene is important with milk production, and the new regulations are appropriate for large-scale industrial milk supply. But the new regime seems punitive and discouraging for small-scale producers. And also, it may mean that some people will go outside the law to obtain raw milk from uncertified producers.

As a consumer I would like to see a two-tier system that makes it as straightforward as possible for small farmers to verify that they are producing healthy raw milk.

I love raw milk simply because it’s a delicious, whole, natural food. It improves my quality of life.

Raw milk contains enzymes and other beneficial components that are good for human health. These qualities are destroyed by pasteurizing and homogenizing.

I personally know many people who get sick when they drink pasteurized milk, but have found that they are able to drink raw milk. I know others who have chronic health conditions, which are improved (sometimes even cured) by drinking raw milk and following a Weston A Price-style diet.

Earlier this month Katikati cheese maker Jill Whalley of Mount Eliza Cheese was calling on Parliament to adjust the rules, to make a level playing field for local artisan producers. It’s cheaper to import cheese made from raw milk all the way from France, than it is to produce cheese from raw milk in New Zealand, she said.

The Hamilton Weston A Price Foundation chapter keeps a list of local raw milk suppliers. Contact them on wapfhamilton@gmail.com

John and Jeanne van Kuyk have full certification to sell raw milk directly from the farm, when they have surplus. They only sell their cheese via their website.