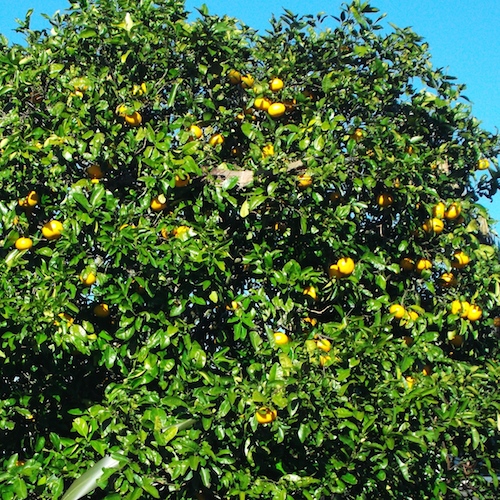 At this time of the year, we have a glorious grapefruit bonanza (or glut). This is exciting, because we ran out of marmalade at Easter, despite making huge quantities last year. My husband Matthew spent his holiday boiling up marmalade (don’t worry, he enjoys it).

I think our New Zealand grapefruit are a national treasure.

They’re absolutely the best in the whole world. They are substantially different from the commercial grapefruits sold in supermarkets, which are mainly grown in warmer climate zones in the US and Australia. New Zealand grapefruit are usually smaller, a beautiful warm yellow-orange, and when fully ripe they have a rich sweetness, as well as the sour/bitter grapefruit tang. Apparently they aren’t strictly grapefruit at all, but a related citrus hybrid. And they’re generally free. If we didn’t have a tree ourselves we could get some from a neighbour, or someone further down the street (after asking politely of course). How great is that?

Possibly one of the reasons behind the lack of celebration of New Zealand grapefruit is that they don’t have much economic value. They may be gold, but nobody’s found a way to turn them into large amounts of cash.

Actually, not everyone in New Zealand can grow grapefruit easily. We have plenty in the Waikato, but they’re not common in the South Island.

Grapefruit were first grown in Jamaica 300 years ago. They were initially called “forbidden fruit” (by a minister of course) and “grapefruit” probably refers to the way the fruit hangs in clusters on a tree. American marketers have tried and failed to change the name to something sexier – maybe they should have stuck to the “forbidden fruit” angle. The French call them “pamplemousse”, which means “pumpkin-sized citron”.

Our New Zealand grapefruit labour under the very humble name of “poorman’s orange”, although they’re sometimes also called sunfruit and goldfruit. Most of New Zealand is too cold for commercial grapefruit species to thrive. According to the Australian horticulturist Malcolm Campbell, New Zealand grapefruit is the same variety as sunfruit, which is grown in Swaziland and exported to England, where it’s considered to be the marmalade grapefruit par excellence.

Grapefruit have plenty of nutritional value – they are right up there with goji berries and quinoa in the list of “superfoods” according to many health researchers. They’re full of vitamins, antioxidants and other nutrients, and the bitter tang is another healthful aspect – it promotes digestion, according to American herbalist Rosalee De La Foret.

However, if you’re taking certain prescription drugs (particularly blood thinners) you may be advised to stay off grapefruit. Compounds in grapefruit, called furanocoumarins, can interfere with the drug actions. Scientist and Waikato citrus grower David Whyte has looked at the research and concluded that this also applies to New Zealand grapefruit (Treecropper, issue 74, 2013, pp26).

If you already have a big old grapefruit tree, it probably won’t take much looking after. If it has borer (and many old citrus trees do), prune away the affected branches in winter, leaving clean cuts. Don’t prune between October and April, when the female borer is laying eggs. (Female borer can smell cut citrus from 2km away!) The tree will appreciate mulching – citrus trees have shallow roots and don’t like having grass growing close to the trunk – and an annual dose of compost or well-rotted manure. (Thanks to Clare Jackson of Greenfootprint for her advice.) 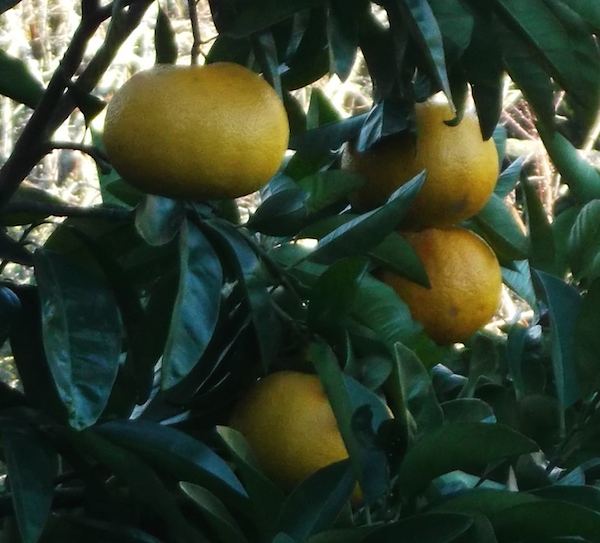 If you’re planting a new tree, bear in mind that they need a sunny spot and can grow to 10 metres high (over several years). You could plant a dwarf variety, but they are not as hardy and will need to be cosseted in dry spells. Garden centres sell New Zealand grapefruit varieties with names like “Morrison seedless” and “Golden special”. They also sell “true” grapefruit varieties, but it is probably not warm enough in the Waikato to grow these easily.

Three things to do with grapefruit

Leave them on the tree until you’re ready to use them. The longer grapefruit stay on the tree, the sweeter they get. But if you’re impatient for marmalade, by all means pick them sooner. The underripe seeds will have more pectin for setting the marmalade. Pick grapefruit by cutting cleanly so there are no broken branches or stems (to avoid attracting borer).

This is fiddly to make, whatever recipe you use. But it is an essential cultural food for a family (like mine) with British heritage. Marmalade on hot buttered wholemeal toast goes pretty darn well with a cup of coffee. Matthew doesn’t do recipes, so this one comes from my father, Ralph Bulmer, via my brother David.

Cut grapefruit into quarters and remove seeds. Put seeds in a jelly bag.

Place fruit and bag in a pot with 3 cups of water. Simmer 15 minutes.

Remove fruit and cut into thin slices. Return to the water in which it was soaked. Boil for 1 hour.

Add for every cup of fruit mixture, ¾ to 1 cup of sugar, depending on your taste.

Boil until it reaches the jelly stage – ¾ to 1 hour probably.

If you have too much grapefruit juice for current purposes, and you have space in the freezer, freeze some. Or bottle it.

The sweet-sour-bitter thing lends itself well to frozen treats. Not very seasonal right now, but delicious.

This is adapted from a recipe in Claudia Roden’s The Food of Italy (Arrow Books, 1989).

Beat juice and sugar together. Taste for sweetness. Freeze in ice-cube trays.

Take the frozen ice cubes out and blend in a food processor until smooth. The granita can be returned to the freezer to eat later.