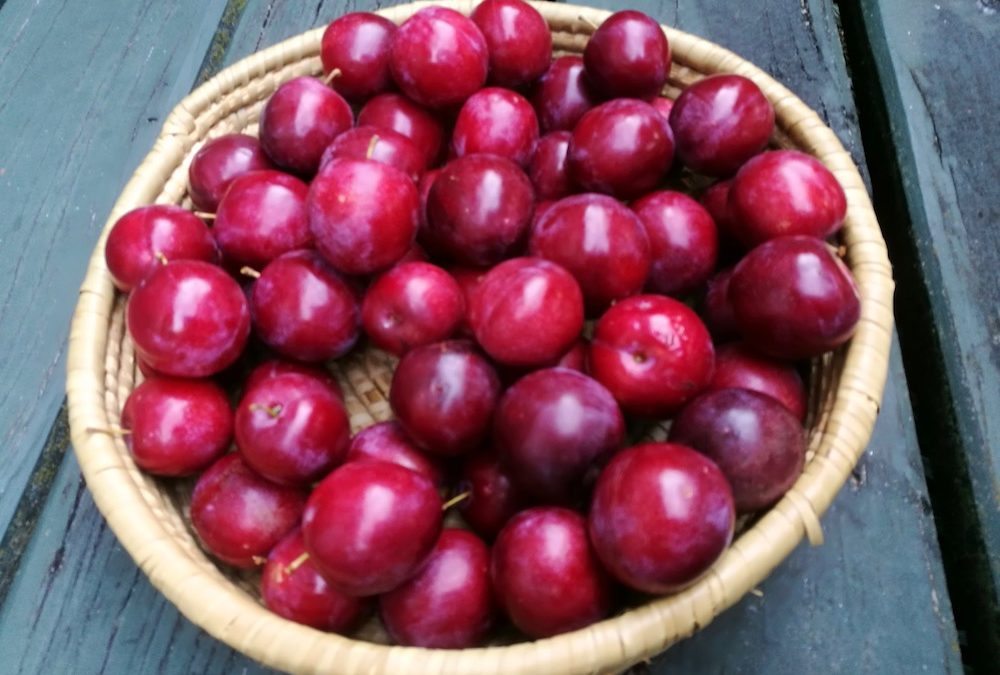 I’ve been making superb plum jellies and gummies with my seasonal abundance of backyard plums.

There are plums galore at the farmers’ markets at this time of year. On Sunday I saw several different varieties: Black Doris, Fortune, Luisa and more.

There are five plum trees in my back garden. Does this sound over the top?

My plum trees don’t all ripen at the same time. That’s not luck, it’s something I planned, that worked out (for once!).

The two huge old cherry plums were in the garden before I came here. They’re probably at least fifty years old.

The cherry plums fruit around Christmas, and we watch the birds feasting in the canopy. The trees are so big that it’s tricky to pick the fruit, even with a ladder.

I’ve planted three other plum trees in the last ten years. The “Black Doris” plums are going to be ready in the next couple of weeks.

These plums drop off the tree when they’re perfectly ripe. But that’s problematic, because then they roll away down the hill to hide.

The “Billington” plums ripen in early January. Most years the tree has a huge crop of smallish red plums with pale flesh.

I also have a young damson tree, which fruits in late summer. Damsons are a very old plum variety. They’re not sweet enough to eat off the tree – well, maybe in very late summer, and if you like fruit very sour. Last year the birds ate all my damsons before they ripened.

Luckily my friend Clare Jackson has a big damson tree.

Growing your own plums

If you like plums, the best way to get a supply is to plant a couple of trees. They will produce fruit in an amazingly short time. Here’s a link to a book Clare and I wrote about fruit trees, Fast Forward Your Home Orchard.

With any plums you have to compete with birds. I’ve used bird netting some years. But these days I just gift some of the crop to the birds of Hillcrest. As long my friends and I can get plenty.

What to do with plums

The windfall plums from the cherry plum trees were way to sour to eat raw. So we had superb plum jelly with vanilla ice-cream at Christmas and New Year.

This is a delicious dessert for a hot summer night.

My friends Jane and Stuart took it several steps further and made a Christmas trifle: plum jelly, cake, custard, fruit,cream and sherry. Mmmm!

Sugar to taste (or another sweetener)

Add a small amount of water to the plums. Simmer until they are soft.

Strain the plums through a sieve. Use a spoon to squeeze the plums, so you get the juice and most of the flesh.

Add sugar to taste. I use Trade Aid’s organic, Fairtrade sugar. I used as little sugar as possible – about 1/3 of a cup of sugar for four cups of puree. You might need less. It depends how sweet the plums were to start with.

It’s okay if the jelly is quite sour.

This is the best way I’ve found to avoid getting gelatin lumps.

Place 1 cup of cold water in a bowl. Sprinkle 4 tablespoons of gelatin powder over the water.

Leave the gelatin to “bloom” in the water. This takes 5-10 minutes. The mixture will expand, so use a bowl that has space.

If there’s any dry gelatin on the surface after 10 minutes, mix it in with a fork.

If you have plenty of time, cover the mixture and leave it to cool on the kitchen bench. When it’s cold transfer it to the fridge.

Here’s a hack for when you’re in a hurry (like me):

Place the pan of hot plum puree and gelatin in a sink of ice-cubes to cool it down fast.

When it’s cool, place it in the freezer. It will set in less than an hour.

These are traditional lollies. They’re the healthy ancestors of gummy snakes and jelly jet planes.

Gelatin is a nutrient that we don’t get enough of in modern diets.

This recipe comes from my friend Meliors Simms, the Holistic Tooth Fairy. She coaches people to improve their dental and oral health in natural ways, including diet.

Here’s a link to her original recipe, which she calls “anti-cavity candy”.

I also made some very pretty coconut water gummies using this recipe.

1 ½ cups plum puree (or other fruit and liquid in any proportion) NB include sweetener to taste.

Heat the fruit and liquid, just to boiling point.

Bloom the gelatin: Place ½ cup water in a bowl. Sprinkle 3 ½ tablespoons of gelatin over the water. Leave to bloom for 5 – 10 minutes. If there’s any undissolved powder, stir it in.

Mix the dissolved gelatin into the hot liquid.

Pour into a shallow flat dish

Cool, then leave to set in the fridge for 2 hours.

When cool, cut into 1cm cubes or other shapes.

Eat within one week.

After jelly, this is my favourite plum recipe. It’s a bit fiddly but well worth the trouble.

It comes from Mastering the Art of French Cooking, by Julia Child, Louisette Bertholle and Simone Beck.

A clafoutis is more usually made with cherries, but plums are wonderful too.

3 cups pitted plums. Slice them neatly if you can. Julia et al say peel the plums, but I don’t bother.

Place the plums in a bowl and sprinkle with the liqueur and sugar. Leave to stand while you make the batter.

Pour a 1cm layer of batter into the plate.

Bake for a few minutes until the batter is set.

Spread the plums evenly over the batter.

Pour the rest of the batter over the top. Smooth the surface with a spoon if necessary.

Bake for about an hour, until it is puffed and browned. It’s ready when a skewer or knife plunged into the centre comes out clean.

Even more about plums

Here are a couple of other Waikato Foodbasket articles about plums: