Kombucha is turning up all over the place these days. There are bottles of kombucha in the drinks chiller of the Hamilton East Binn Inn. (All the way from the United States!) But it’s easy to make it at home. And if you’re brewing it yourself, it counts as local food.

If you’re new to kombucha, it’s a sour-sweet fermented beverage that is packed full of probiotics, micro-organisms that are essential for human health.

It’s made by a kombucha “mushroom” (also known as a “scoby”), which is a big pale pancake-shape that floats in a huge jar of sweetened tea. It’s one of the weirder and more interesting forms of kitchen fermentation I’ve come across. It sits alongside home-made yoghurt, sourdough and sauerkraut in the DIY food spectrum.

Kombucha probably originated in China, and it’s been very popular in Russia and Eastern Europe. The term “scoby” is an acronym for “symbiotic colony of bacteria and yeast”, which describes what kombucha actually is. 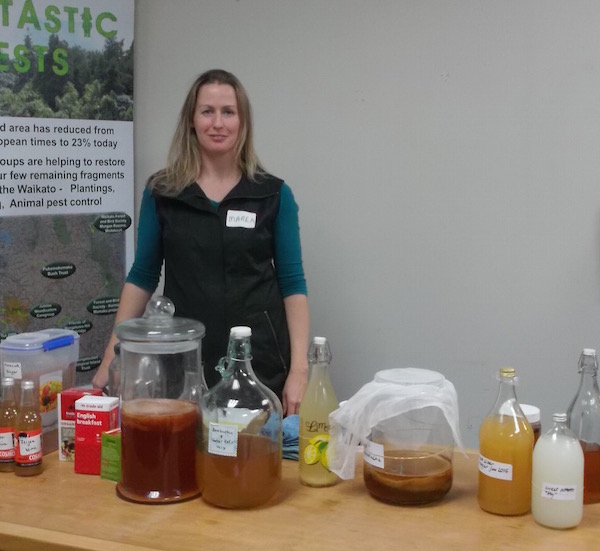 Above: Marea Smith with the fabulous array of fermented beverages. The tallest jar to the left is her continuously fermenting kombucha scoby. The bottle beside it contains her kombucha-kefir second ferment combination.

Recently I joined with the wonderful and highly knowledgeable Marea Smith from the local Weston A Price Foundation group, to present a workshop on kombucha and other fermented drinks at the Waikato Environment Centre. It was loads of fun. Many of the 30-plus people who came to the workshop were interested in the health-promoting qualities of kombucha, and Marea has a really good grasp of the research and practicalities of this. Kombucha is increasingly getting recognition from mainstream health professionals as one of the most effective probiotics. One friend has been advised by a very conventional dietitian to make kombucha and milk kefir for her son, who has serious health problems.

One of the younger members of the group (age range was 7 to around 70) made a very pertinent comment. “You’re talking about that as if it’s alive,” he said. “Well, yes, it is,” Marea and I replied in unison.

I’ve been making kombucha for a couple of years. I acquired my first kombucha scoby from Erika Barrie, a passionate and skilled foodie who was on my permaculture course. (We did a Permaculture Design Certificate with Hamilton Permaculture Trust, back in 2010. It was a challenging and mind-expanding course, that went way beyond growing organic veges.)

The kombucha scoby is sort of spooky looking. The closest comparison I can think of is a headless axolotl! But it’s also a bit like the cider vinegar “mother” that forms in the bucket when I make cider vinegar.

What to do with kombucha

Some people drink their kombucha straight, just as it comes from the jar. I prefer it diluted – I add a splash of kombucha to a glass of water.

Marea Smith combines kombucha and water kefir in a second ferment, which produces a delicious hybrid beverage with all the benefits of both.

Auckland-based chef Rene Archner makes and sells kombucha with delicious flavourings, using a range of herbal teas in the second fermentation. You can buy Rene’s products at Village Organics – they’re well worth trying. And I recently bought a bottle of commercially made kombucha from the Ceres shop in Auckland. It was all the way from Canada and tasted pretty much like mine, but much sweeter. (They obviously hadn’t done a second ferment.) 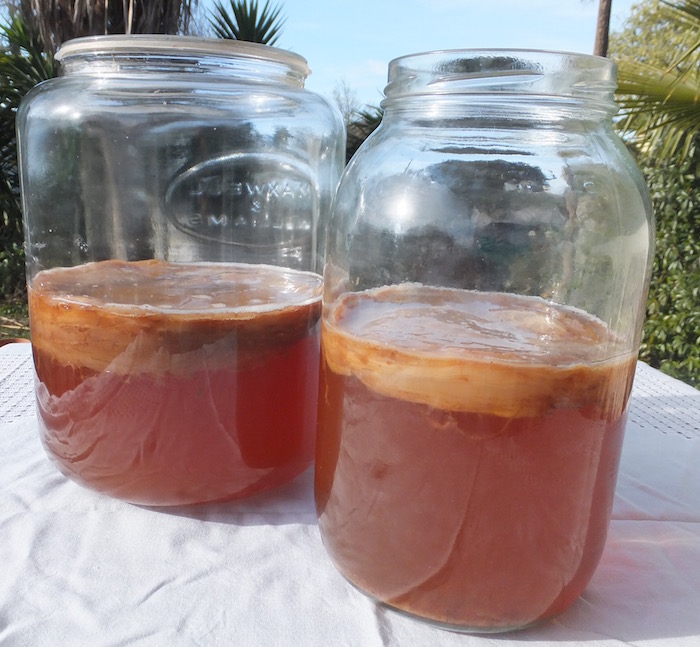 I have two kombucha jars going currently. I wouldn’t normally keep them in the sun, but it was hard to get a photo otherwise. Photo by Meliors Simms.

To get the maximum health benefits from kombucha you need to do a second ferment, Marea says. This means leaving the kombucha in the bottle for up to two weeks after pouring it off the scoby. After this time the sugar content will be about 20%, and there will be a lot more beneficial yeasts and probiotics. But the flavour will be much more vinegary and sour. Check regularly to let off the fizz.

You can add flavourings during the second ferment – fruity herbal teabags, or fresh fruit, or spices. There’s huge scope for creativity.

If you drink kombucha immediately after pouring it from the scoby jar, it contains a lot of sugar.

I keep my kombucha scoby in a 4 litre glass cookie jar, which I found at Briscoes. (Actually, I have two jars going currently.)

A kombucha scoby prefers a wide, shallow jar, and it will grow to fit the available width. The scoby needs some air, so I don’t seal the jar. I cover the opening with cheesecloth and a rubber band, to stop ants from finding their way in.

Since I’m married to an Englishman, we drink a fair amount of tea in our household. We usually have some left in the teapot. I dilute this with boiling water in a one-litre jar (so it’s a mid-brown colour, not really strong), and stir in a quarter of a cup of white sugar. I leave this to cool and then add it to the kombucha jar, after pouring off most of the liquid into a bottle.

I use leaf tea. But other people use tea bags, which works fine too. Ideally you would use organic and fairtrade tea (most tea plantations use toxic chemicals and treat their workers badly). You can get great tea from Trade Aid shops or order it online. Also, ideally you would use filtered water. I don’t, but I probably should. Micro-organisms don’t like even small amounts of chlorine. But I think the boiling process means the chlorine is evaporated out. My scoby seems to be pretty healthy.

About once a week, or a bit longer, I pour most of the kombucha out of the scoby jar. I leave at least half a cup of liquid in the jar, to maintain the acidity.

Marea Smith uses a continuous brewing system. She has a much bigger jar than mine, and never pours off all the liquid. She adds tea regularly and scoops liquid out as often as she needs to.

Marea always does a second ferment, combining the kombucha with water kefir, because that’s what her family enjoys drinking.

In this recipe, which I found on www.sarahwilson.com, flavourings are added during the second ferment.

Place in a jar:

Cover and leave for five to 10 days before drinking.

If you want to find out more about kombucha or any other fermented foods, the local Weston A Price Foundation chapter is a really good place to start. They have regular meetings.

How to get a kombucha scoby

You can buy a kombucha scoby online, but it’s much more interesting and fun to get one from someone you know. If you go to one of the Weston A Price chapter meetings, there will probably be some spares on the table.