The Kawhia Kai Festival is an annual food event celebrating Maori food and culture. It takes place at the remote, normally quiet settlement of Kawhia on Waitangi weekend, and this year I went for the first time.

It’s one of the Waikato’s most famous food festivals. It’s low-key and mainly aimed at locals, but it also gets a big thumbs up from Lonely Planet.

Kawhia is just over an hour’s drive from Hamilton. The road winds along the Kawhia Harbour, where the Tainui waka, or canoe, landed in the great migration, more than seven hundred years ago. There was hardly any traffic, and I wondered where everybody was. I soon discovered that they were already there. 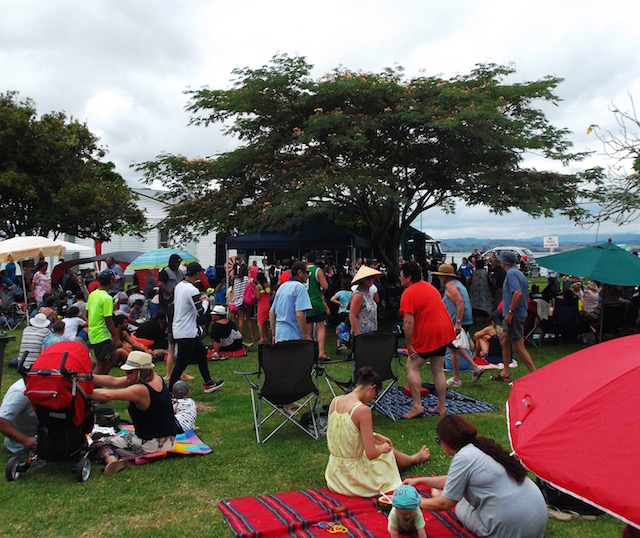 When we arrived, shortly before noon, we found the festival rocking, with hundreds of people watching kapa haka performances.

We’d just missed the big waka, which had set off to paddle around the harbour.

But we didn’t miss the food.

This was definitely the main event: fresh hot hangi meals, prepared by local marae and beautifully presented in individual flax baskets. For $15 you got pavlova as well. Well before midday people were lining up at the hangi stall, and walking away with huge armloads of baskets.

If you’ve never eaten hangi food, this is a really good place to start. It’s New Zealand’s iconic “slow food”. Well cooked hangi food has wonderful flavour and texture, like nothing else I’ve ever eaten.

A hangi is a long day’s work – it’s a special occasion style of cooking. The food is cooked for several hours underground, using specially heated stones.

There were stalls offering kaimoana or seafood including paua, mussels and whitebait.

The marinated raw fish was good. Pretty much as I make it myself, it just needed an extra squeeze of lemon. (I’ve included a recipe at the end of this post.) Matthew had paua on rewena (traditional sourdough) bread, which was delicious with a sprinkle of salt. The paua was minced rather than in the usual fritter. I couldn’t find any koki (shark liver pate) – it must have been snapped up.

I love traditional fermented food, so I was happy to find some on offer. I missed out on the toroi, which is fermented puha or watercress and mussels. But I bought a pottle of kaanga wai to take home.

Kaanga wai is fermented corn. (Some of the stalls called it “rotten corn”!) It’s made by steeping corn kernels in cold running water for at least two months. It looks like creamed corn, but has a strong, cheesy aroma. Like the smelliest European cheese you can imagine, and then some. …and I have to say that it was too challenging, even for my family of adventurous eaters! Some people say it tastes like nuts, but I couldn’t get past the smell.

There was a stall selling Taha, which is an interesting New Zealand beverage that I hadn’t tried before. It’s like a mild ginger beer, not too sweet and flavoured with kawakawa and manuka honey. I enjoyed it – makes a change from my favourite Phoenix cola. 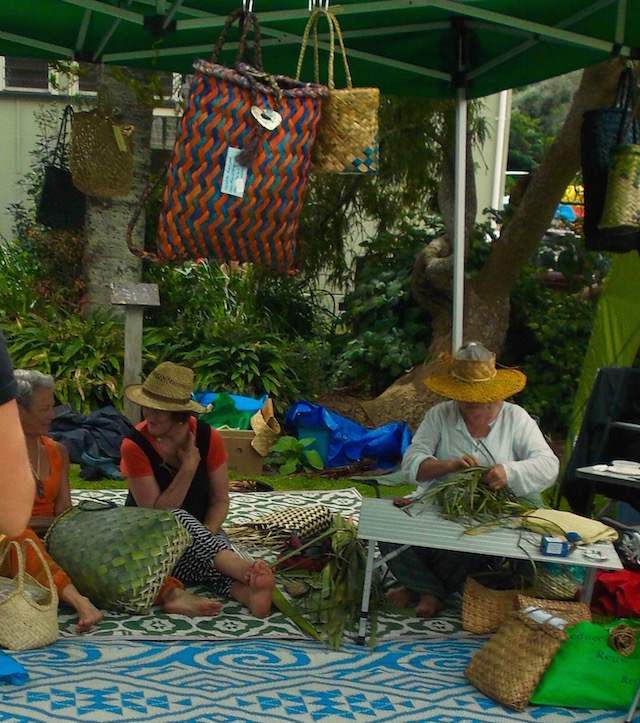 Some great reasons to go to the Kawhia Kai Festival:

Traditional Maori food: Go for the superb hangi. Make sure you have a good appetite – don’t eat a big breakfast.

Weaving: This festival is a great place to buy kete, potae (hand woven hats) and other traditional weaving. Take some spare cash.

Swim in the harbour: there were scores of youngsters jumping off the wharf.

Here’s a recipe for raw fish. Ika mata is the Cook Islands name for it, I’m not sure if there is a special Maori term.

400g fresh fish – most recipes say white-fleshed fish, but I usually make it with trevally

1 can coconut cream – Trade Aid or Ceres are the best, because they don’t contain unnecessary additives

Cut fish into bite sized pieces and place in a glass or ceramic bowl.

Add the juice of 4 lemons and stir gently. Cover the bowl and leave to marinate on bench for 1 hour, or in fridge for 2 hours. The acid in the lemon juice effectively cooks the fish.

Drain most of the lemon juice off and add enough coconut cream to cover fish.

Cool in fridge for at least half an hour before serving.

This is even better if you leave it overnight.