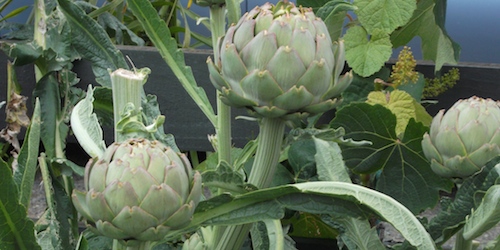 Globe artichokes have always been a favourite part of a New Zealand summer for me. They’re beautiful sculptural plants, which look like giant, non-spiny thistles. Globe artichokes are delicious and they’re pretty easy to grow, if you have a sunny, sheltered garden and plenty of space.

My garden isn’t quite sunny and sheltered enough – sadly, my artichoke plant was blown over on a windy day in November and never quite recovered.

You need to pick the artichoke heads before they start flowering, if you want to eat them. I’m aware that not everyone (yet) knows how to eat globe artichokes. When I was a baby my parents lived in an apartment in a big house on Shelly Beach Rd in Auckland. The house belonged to the Bartlett family, who had spent time living in France. Their garden was flourishing with huge artichoke plants, and my mother learned to love them, and more to the point, how to cook and eat them.

You can buy jars of artichoke hearts from the supermarket at any time of the year, and they’re delectable in an antipasto platter. But each freshly picked, freshly cooked whole artichoke head is a culinary event on its own.

The part that’s eaten is the immature flower head – it’s really a giant bud. The heads are quite variable in size – I think it may depend on the variety. But I’ve also seen the heads on one plant range from 5cm to 15cm in diameter. Around 10cm is a good size for an individual portion, but I would never turn down an artichoke of any size. 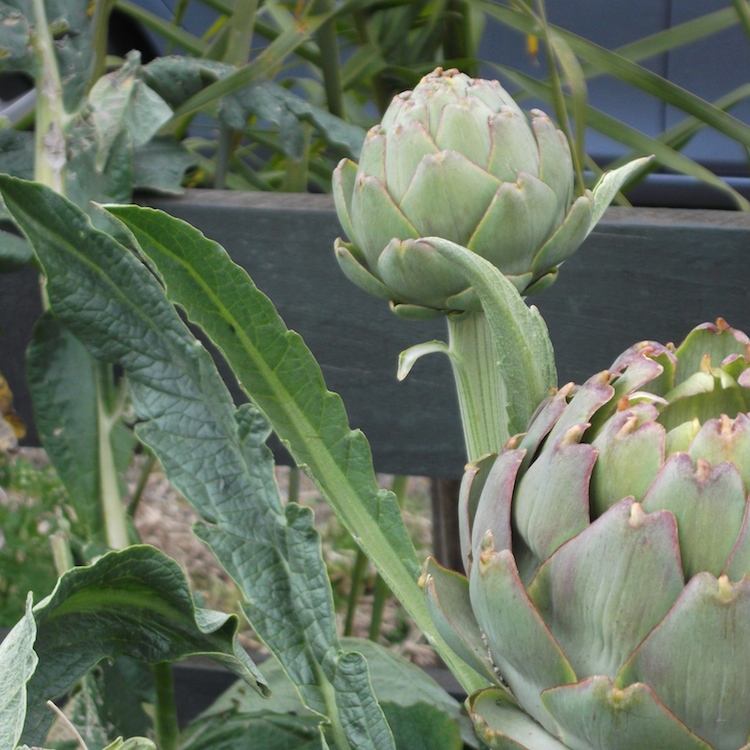 These glorious globe artichokes (above) are pictured very shortly before being devoured by my family. I didn’t grow them – they came from the garden of my friend Meliors.

I serve artichokes as the first course of a meal. Since we usually have just one course, this immediately turns a family meal into an event.

My mother once attended an elegant dinner party in Paris, and observed that her French hosts ate artichokes with their fingers, pretty much as I have described.

You need one head per person, but if they’re very large, two people could share.

Trim the stalk so it is very short (you don’t eat this part).

Place the artichokes in a large saucepan. Cover with water. Bring to the boil and simmer with the lid on, until the heads are soft enough so the petals (many people call them leaves) can be pulled off. This takes at least half an hour, maybe a bit longer. You don’t want the artichokes to get too soft and mushy and fall apart – but you must be able to pull the petals off easily.

Drain the water off and place each artichoke on a small plate.

Serve with a small ramekin of dipping sauce for each person.

My all-time favourite sauce for globe artichokes is melted butter with a small amount of garlic, mixed with freshly squeezed lemon juice to taste, and maybe black pepper.

Other good artichoke sauces are hollandaise or vinaigrette. Mayonnaise is good too.

The process of eating the artichokes is much easier to learn by watching someone do it.

You pull the petals/ leaves off the artichoke, one by one, with your fingers. Hold each petal by the hard end and dip the soft end into the sauce. Then nibble the delicious soft part. Discard the hard bit (I forgot to say, you’ll need a bowl for the discards) and pull off another petal.

When you’ve been through all the petals, it’s time to tackle the heart. This is at the base of the flower, just above the stalk. Scrape off and discard the hairy bits (the choke) above the heart, and trim off any remaining stalk (it’s very bitter). Cut the heart into bite-sized pieces, dip into the sauce and enjoy. (You could use a fork for this part.)