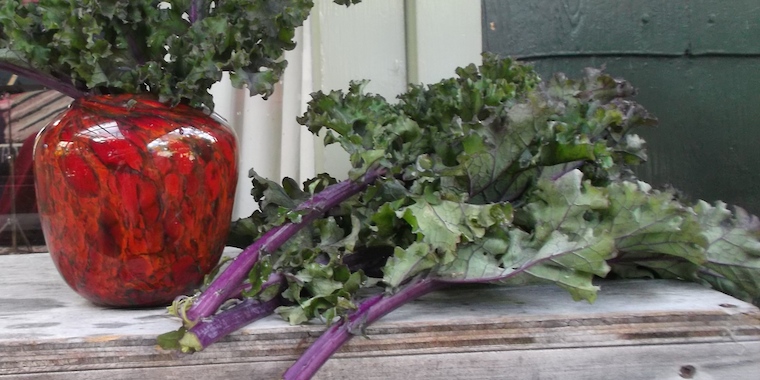 At the farmers’ market at this time of year, the standout seasonal green is kale. I buy mine from the Catos, who also sell excellent potatoes and garlic. This weekend they had two kinds of kale: green and red, which is actually more like purple. It’ll be even sweeter after we get a frost, they told me.

Kale features strongly in traditional European comfort food. It’s often combined with potatoes and bacon or sausages. I love kale, but I’m aware that not everyone shares my enthusiasm. My son Albert says: “It makes everything else on the plate seem more interesting.” He’s correct: kale may not be charismatic, but it complements many other foods.

Some of my gardening friends are good at growing kale, but I’m not. It always gets chewed up by slugs or little green cabbage butterfly caterpillars. Or covered in aphids. I still try every year though. I’ve just planted six kale seedlings in four different places around the garden, in an attempt to foil my competition.

Kale is part of the brassica family, which includes broccoli, cauliflower, cabbage and brussels sprouts. The health and nutrition gurus are very keen on it – it’s full of good stuff. Kale that’s been grown in the ground (as the Catos do) will have better nutritional qualities than kale that has been grown hydroponically.

Richard Cato reckons his kale needs approximately 5 minutes of boiling or steaming. Slice it finely before cooking. If you have older and tougher kale it might take a bit longer.  Very young and tender (tiny) leaves can be stir-fried, or even eaten raw in a salad.

Cooked this way, kale is excellent with a roast dinner and rich gravy.

Wash the leaves and check for caterpillars. Chop loosely into pieces 3 or 4cm wide. If the centre rib is very thick and tough, trim it away. (Not necessary with the Catos’ kale.) Place in a saucepan and add boiling water to make 2-3 cm in the bottom of the pan. Cover and bring to the boil. Simmer for about 5 minutes, until the kale is tender but not mushy. Drain the water off before serving.

If you don’t have gravy, this is another good thing to do with kale.

Cook the kale as above. Combine with a cup of cheese sauce.

Melt in a saucepan 1 tsp butter.

Remove from heat and stir in 1 tsp flour.

Return to heat and bring to a simmer, stirring often. Cook for 5 minutes.

Add 1 cup of melted tasty cheese and heat, stirring, until cheese is melted and sauce is simmering.

Season with freshly ground black pepper, a pinch of salt, and a pinch of chill powder (optional)

Cook kale as above. Add 1 tsp sesame oil and 1 or 2 Tbsp oyster sauce (from the Chinese section of the supermarket).

Kale with mushrooms and pasta

Thinly slice kale and cook as above. Combine with cooked pasta, sautéed mushrooms and pesto. (Quantities will vary according to how many people you’re feeding.) Add salt and freshly ground pepper to taste.

I have discovered that most of my friends consume kale in smoothies, rather than cooking it. I guess they would agree with Albert.

I like this basic recipe. Feel free to adapt it to suit your taste:

1 leaf of kale, chopped up (use more if the leaves are small)

a handful of blueberries or other fruit (e.g. pineapple or mango)

Whizz in a blender until smooth