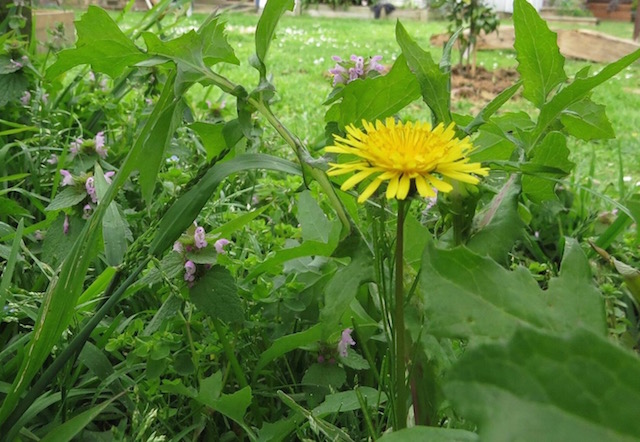 I have to admit that my garden contains more than a few weeds. I don’t like using poisonous sprays, and I’m always looking for better ways to manage all these uninvited plants.

So when I heard that edible weed expert Julia Sich was running a workshop in my neighbourhood, I jumped at the chance to find out more about what I could be doing with weeds.

I was happy to find nearly 40 people squeezed into a neighbour’s house to hear Julia talk. I’m so glad to know I’m not the only person interested in eating weeds! It was quite a wide range of people – not just urban gardeners like me, but also some with lifestyle blocks and farms.

It was a fascinating three hours. Julia passed around samples of common edible weeds. And then we went for a walk outside, and she showed us some of the seasonal edible weeds in Beate’s garden.

Many weeds are edible, including forget-me-not, violet, dandelions and all those plants that look a bit like dandelions but aren’t (e.g. hawkbit or hawk’s beard, and cat’s ear). Oxalis is edible – in Europe it’s called “wood sorrel”. And so is red “dead nettle”, before it flowers (after that it becomes very aromatic).

Even thistles are edible – all parts! Generally, Julia said, if plants are prickly, or have stings like nettles, that’s a sign that they are protecting something valuable, e.g. rich minerals. 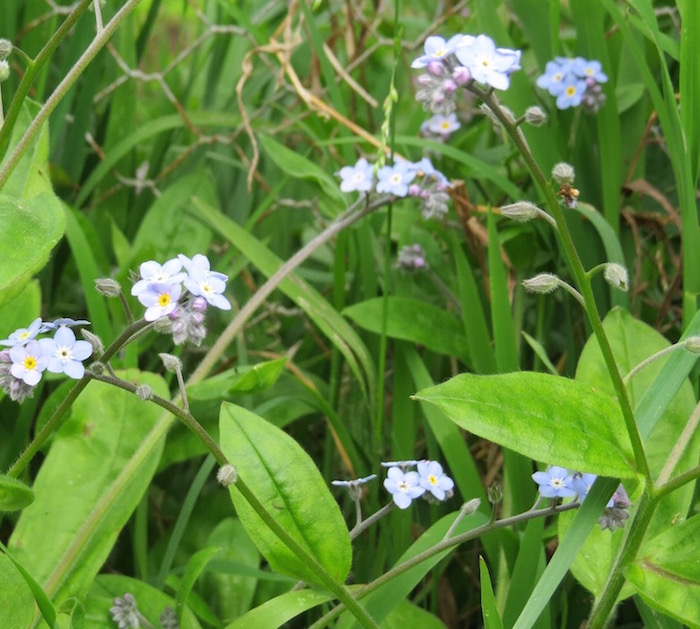 Forget-me-nots – good in a salad. This photo and dandelion photo by Dani Edwards.

Julia, who’s based in the Bay of Plenty, comes from a lineage of plant growers. She trained in horticulture and has been interested in herbalism for decades, but started using weeds during her recovery from chronic illnesses.

Weeds are medicines, Julia said. “They’re medicines for the earth and they’re medicines for us. What’s growing around you is what you need. What I hope is that we understand what these plants are doing, so we don’t look at them in such a negative light. Weeds are survivors, and they are phenomenally nutritious.”

Mikaere Peck, who organised the workshop, is a big fan of weeds as medicine. “I believe certain plants have been purposefully ingrained in people’s minds as ‘weeds’ and ‘pests’ for many generations now,” she said. “The nutrients and vitamins in these ‘weed’ plants are so high (higher than the average vegetables people grow), that they can be used as medicine to keep people in optimum health. Imagine if everyone understood this knowledge, and how healthy everyone could be.”

Julia passed around a series of dandelion-like leaves for us to taste. They were all pretty bitter. “We’ve lost the art of tasting bitter,” she said. “People think if it tastes bitter, it’s poisonous.” But bitter is very important for healthy digestion – it stimulates saliva and digestive enzymes.

By far the most poisonous local weed is hemlock. But it’s easy to identify by its purple blotchy stems. “And it stinks, like ragwort.” You also shouldn’t eat milkweed (also called spurge or Euphorbia), Julia says. And sadly, buttercups are also not edible for humans. (I did know that, but I’m still hoping to find something I can do with them.)

Julia’s very informative ebook, Julia’s Guide to Edible Weeds and Wild Green Smoothies, lists at least forty common edible weeds, with photos. However, I learned even more from the workshop. A picture can’t tell you what a plant smells or tastes like. 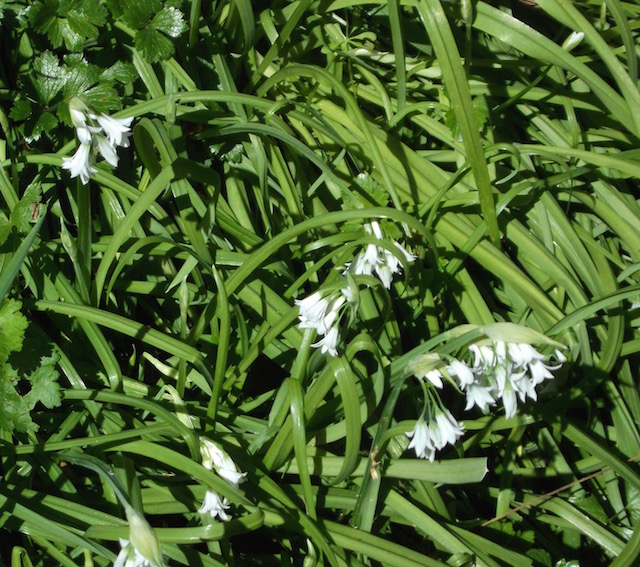 Onionweed in my garden, just waiting to be turned into tempura or pickled onions – see recipe later in this post.

Julia loves adding weeds to smoothies, instead of (or as well as) other leafy greens. Weeds have a particularly good range of nutrients, she said.

She whizzed up a couple of delicious smoothies for us to taste. “I like to use a little bit of a bunch of different varieties of weeds,” Julia said.

If you’re keen to make weed smoothies, Julia’s book includes many recipes. It’s available from her website, www.Juliasedibleweeds.com, in both paper and ebook format.

My preferred way to eat weeds is to sneak them into salads. I just chop them fine and mix them with other leafy greens. Nobody has ever complained. I use a few leaves of each kind, so the flavour isn’t overwhelming. The main exception is chickweed – you can use plenty of that, because it has a very mild taste, and the sprigs are attractive. 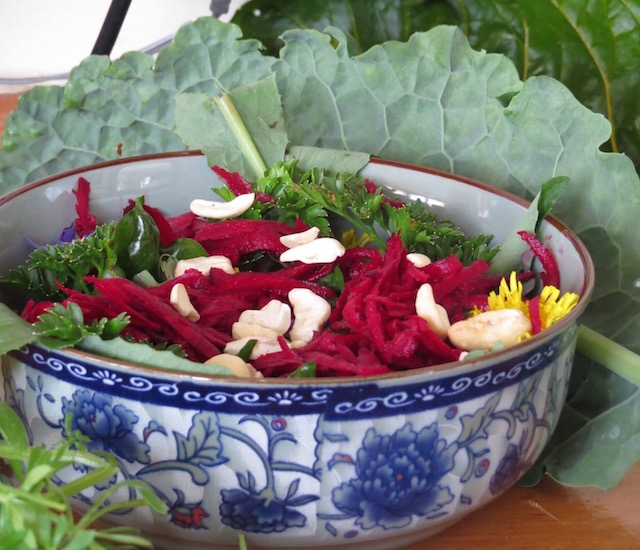 A beautiful spring salad with dandelion leaves and flowers, kale, parsley, silverbeet, grated beetroot and cashews. Salad and photo both by Dani Edwards.

Onionweed, Allium triquetrum, also called three-cornered leek, or wild garlic, is an edible weed that’s prolific in my garden.  It can be chopped finely and used in any recipe that calls for spring onions or chives. It tastes a bit like garlic and a bit like onion – and a bit like leek as well. A handful of flowers go well in a green salad. Here are two wonderful recipes for onionweed.

This is fiddly, but the result is exquisite, tiny pickled onions. Peel as many tiny onionweed bulbs as you have time for. The amounts in this recipe are for one or two cups of bulbs. Make brine by mixing 3 tablespoons salt into 2 cups of water. Soak onionweed bulbs in brine for 24 hours.  Drain and rinse bulbs, and place them in a sterilized jar. Place 2 cups cider vinegar or white vinegar and ¼ cup sugar (more if you like sweeter pickles) in a saucepan and bring to the boil, stirring until sugar is melted. Pour vinegar over the bulbs. Optional additions to the jar: a small piece of hot chilli pepper and half a bay leaf.  Seal and wait at least a fortnight before eating.

This recipe uses onionweed flowers to make delicious little fritters. I found it on Johanna Knox’s website wildconcoctions.blogspot.co.nz. Johanna is a foraging aficionado, and I highly recommend her book A Forager’s Treasury (Allen & Unwin, 2013).

a pinch of salt

Cooking oil (olive oil, or whatever you normally use)

A handful, a bowlful, or a basketful of onionweed flowers – as much as you want

Cut the flowers off their stalks, leaving a 1 – 2cm piece of stalk. This holds the clusters together, and gives you enough stalk to grip when you dip them in the batter.

Chill the water till it’s icy cold – put it in the freezer, or add ice cubes to bring the temperature down quickly. It should be really, really cold.

Whisk the egg in a bowl.

Add the icy water and whisk some more.

Add the flour and salt, and mix gently and briefly with a spoon, so it’s just barely mixed. Don’t worry too much about lumps.

Put about half a centimetre of oil in a frying pan, and heat to medium high.

When the oil is hot, dip each flower into batter, then drop it into the oil.

When a battered flower is lightly browned on one side, turn it. They won’t take very long to cook.

Remove each battered flower as soon as it’s lightly brown on both sides, and place on a paper-towel-lined plate.

Serve with a little pot of soy sauce to dip fritters into.

If the tempura comes out at all soggy, try hotter oil or even colder batter, or both.

My favourite weed is perennial stinging nettle (Urtica dioica), although since I’m growing it on purpose it maybe doesn’t count as a weed in my garden. I keep it in a couple of big tubs. Right now it is growing profusely. I harvest the nettles using clippers, and I try to avoid being stung, but if that happens I rub on dock or plantain juice. The buzz from a nettle sting goes away in 36 hours and there’s no lasting damage. Some people use thick rubber gloves when dealing with nettles.

Obviously you can’t eat nettles raw. Mainly I just dry the leaves to make nettle tea. I leave the stalks to dry on a big platter in an airy room, covered with a paper towel. I turn the pile over at least once a day. The leaves take a few days to dry. 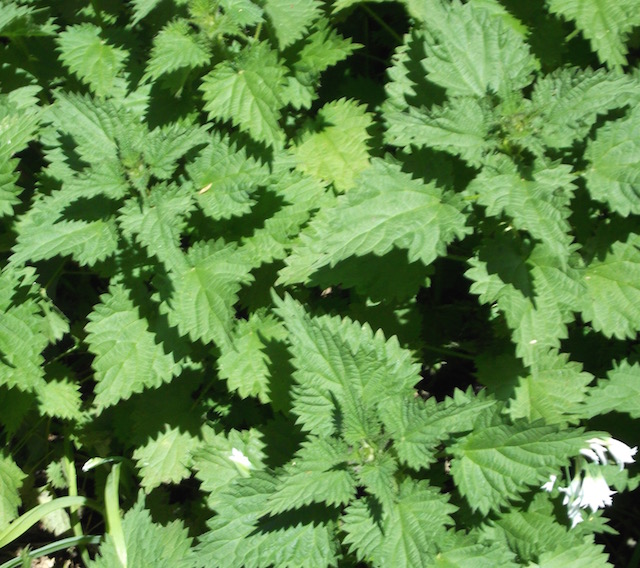 Stinging nettles – don’t put them in a salad, but they’re better than spinach when cooked.

Nettles can also be steamed and eaten as a spring green, or stir-fried. Hugh Fearnley-Whittingstall calls this “a cheap version of spinach”. Actually, I’m pretty sure nettles are more nutritious than spinach.

This week we had nettle and tarragon soup, a superb spring delicacy.

The recipe comes out of Cuisine Bon Marche, by Hugh Fearnley-Whittingstall, one of my favourite recipe books.

If you don’t have fresh tarragon, use chives instead. Or onionweed.

Melt butter in a large saucepan. Add garlic and onion and cook gently until onion is soft and lightly browned. Pile the nettle leaves into the saucepan. Pour in the hot stock and return to the boil. Allow to simmer for 3 – 4 minutes.

Ladle soup into a blender, pureeing until smooth, in batches if necessary. Return soup to a clean plan.

Strip the leaves off the tarragon stalks, chop them – not too finely – and stir two-thirds into the soup. Season to taste with salt and pepper. Reheat the soup without reboiling.

Lightly whip the cream, and stir two-thirds into the soup.

Serve the soup with a small blob of the remaining cream and a pinch of chopped tarragon in each bowl.