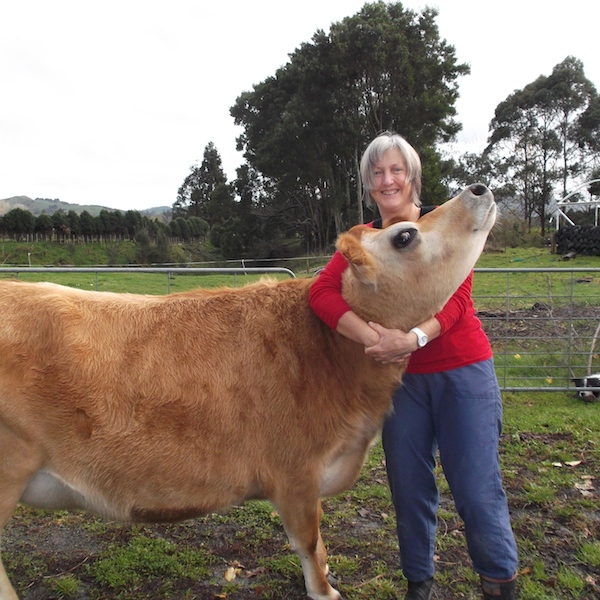 Meg Daly’s Celtic baking is one of my favourite reasons to go to the Hamilton Farmers’ Market on Sundays. In my house we’re huge fans of her Scottish oatcakes, and we’re sadly disappointed when they sell out (though this gives you some idea of Meg’s popularity).

This vivacious Irishwoman has a stall full of traditional delicacies: scones, oatcakes, bara brith (Welsh raisin bread), Yorkshire parkin, Scottish bannocks, and much more. There’s even a gluten-free shortbread that many people rate as better than the original. (The Irish have a high rate of gluten intolerance, Meg says.)

This food pushes “homesick Celt” buttons that I barely knew I had. Many New Zealanders have an Irish or Scottish granny, Meg says. (Actually, my Celtic whakapapa is Welsh.) Even the traditional Maori rewena bread – that was originally Irish soda bread.

And if you haven’t yet tried Meg’s Eccles cakes, you’re in for a treat. She reveals the secret to this northern English delicacy that many Kiwis know about from watching Coronation St – the raisins are soaked in Meg’s home-made cider, which gives a succulence to the fruit that pairs perfectly with the buttery crunch of the pastry. (Seriously, you should try them.)

Celtic baking resonates with people on all sorts of levels, she says. “I get people in their 80s, who say, ‘my grandmother used to make those’.“ And some people have told her they know about Welsh cakes from the Welsh poet Dylan Thomas, who mentions them in Under Milk Wood. Meg loves listening to people talk about food, and says she doesn’t get to do this as much as she’d like because the market is so busy.

But when I went out to visit Meg at her Te Kowhai home I found that Celtic Cuisine is just the tip of the iceberg for this creative cook and gardener.

“It’s the money-maker that lets me do these other things,” she says, with an arm around one of her affectionate house cows, OD (short for Odessa). “My real joy is in growing things.”

There’s a vege garden flourishing in the depth of winter. There’s a gully that Meg is laboriously reclaiming from blackberries and replanting in natives. And several tunnel houses containing passionfruit vines, tamarillo bushes and 50 araucana chickens, who produce pretty blue eggs. There’s an orchard of young fruit trees. And there’s a row of extra-large worm bins – Meg is part of the “City to Soil” food waste recycling programme, where people bring her their kitchen scraps to turn into fertilizer.

Meg does most of the work. Her partner John has his hands full with his building business. “He says he’ll do more when he retires.”

A delicious aroma is wafting from a tiny outbuilding – the commercial kitchen where Meg’s right-hand woman, Teresa Jones, is busy baking shortbread for next weekend’s markets. The recipes are traditional, with Meg’s modern, healthier twist – she often reduces the amount of sugar, and uses wholegrains and oat bran where possible./span> 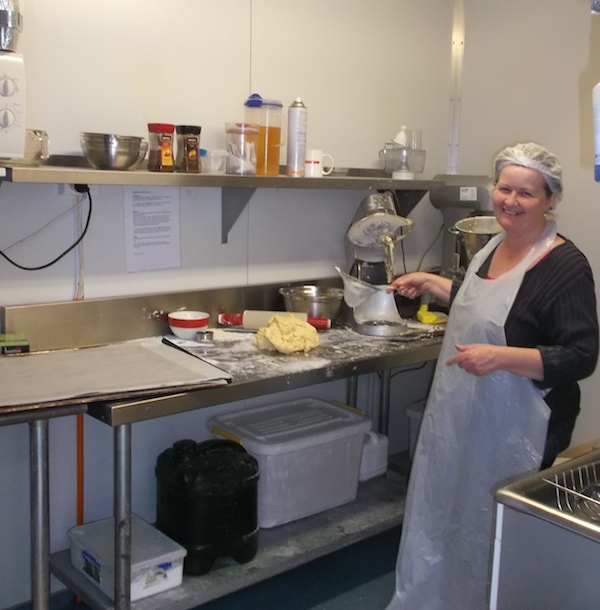 Teresa, hard at work in the kitchen

Meg often hosts Woofers from all over the world. They help her with the markets as well as bringing new food influences. She’s been selling Eastern European Rohlicky (rolls) at the farmer’s market recently – a recipe gleaned from some Czechoslovakian Woofers. “It’s a little croissant with butter, eggs, milk and caraway seeds.”

Meg emigrated to New Zealand in the 1980s, and worked as an occupational therapist for the DHB and ACC before she decided to make a career change. The sudden death of Green Party co-leader Rod Donald in 2005 at the age of 48 was a wake-up call. “He was the same age as me and I thought, ‘What am I doing?’ That week I started to look for a house in the country.”

She often gets people suggesting she expand her business beyond the Waikato farmers’ markets. “When you come up with something really nice and it’s a little bit different…” But growing the business would be a mixed blessing, she says. It would mean she’d be spending more time on the baking, and have even less time for her garden. More money doesn’t mean being happier, Meg says.