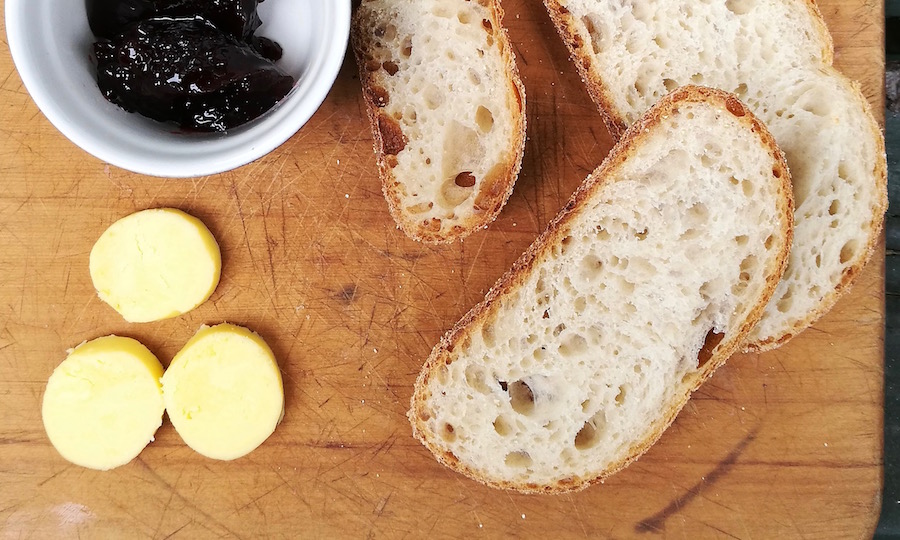 Writing about butter is close to the top of my list of interesting things to do. After eating butter.

It has always surprised me that the Waikato doesn’t have a premium iconic butter product. Our beautiful grass-fed dairy cows produce so much milk and cream, but up till recently we’ve only had factory-made butter, which could come from anywhere.

So I was very happy to see Bellefield butter arrive at the Waikato Farmers’ Markets. It’s superb cultured and flavoured butter made and sold by two lively “Kiwis with Liverpool accents”. Bellefield butter regularly finds its way into our food basket.

And I was delighted when Jan and Steve Dolan from the Bellefield Butter Co agreed to be interviewed for the Waikato Foodbasket.

I visited them in the shipping container-turned-kitchen where their butter is made.

Steve and Jan are delighted that their butter is being recognized and celebrated with awards, so early in their business. They started trading in October 2017, and they’re already notching up Outstanding New Zealand Food Producer Awards.

Not just a delicious addition to the local food economy, they’re one of a tiny handful of small-scale artisan butter producers in New Zealand. Traditional butter making is having a resurgence in popularity internationally, but New Zealand hasn’t been part of this up till now. New Zealand butter barely gets a mention in US-based food writer Elaine Khosrova’s book, Butter. 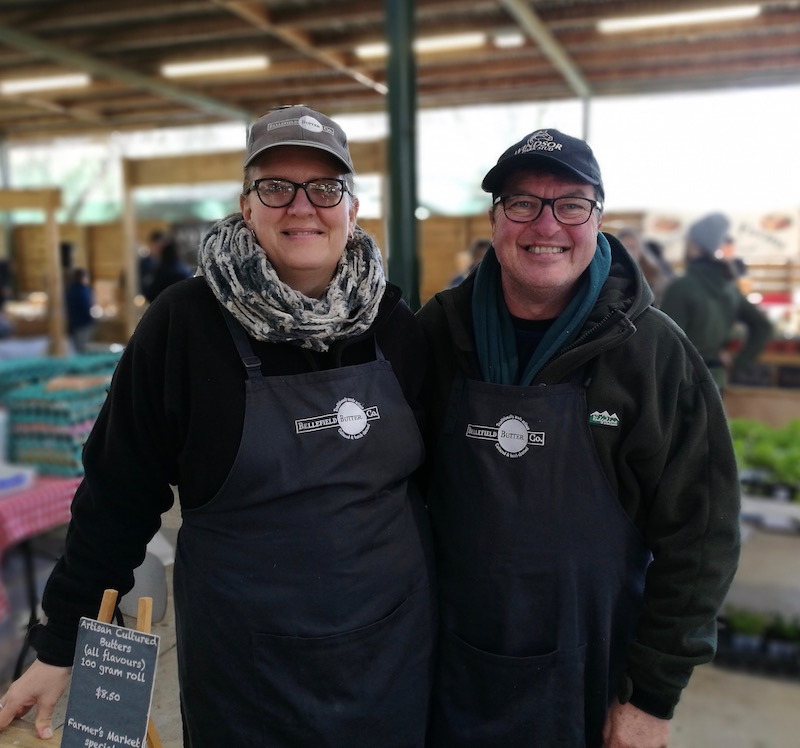 Mr and Mrs Buttersmith: Jan and Steve are regulars at the Waikato farmers’ markets.

Steve and Jan brought their family (they have two young adult children) to live here twelve years ago. The name Bellefield comes from the legendary training ground of Everton Football Club in Liverpool, their hometown. (They are all Evertonians.)

But Bellefield is also a nod to the beautiful green fields of the Waikato.

For Jan, coming to New Zealand meant realizing a dream – “I waited 40-odd years to own a horse!” she says. Currently she has three.

Steve and Jan had been contemplating starting a business for some time. But they were propelled into it when they were both made redundant in late 2016. Jan had been working in adult education and Steve was a telecommunications engineer.

They threw a lot of business ideas around and settled on butter.

It took about 18 months to get the product to market – on top of research and logistics there were huge piles of regulatory paperwork. They were one of the first businesses to go through the new Food Safety Act. “MPI didn’t know what to do with us,” Jan said. The regulations are designed for large-scale export businesses, and many aspects are difficult for small producers in the local food economy.

However, there are signs that this is changing. At the recent Eketahuna Cheese Festival in May the new Minister announced that the Government wanted to support local artisan producers and food tourism.

Sweet and cultured butter – the difference

Traditional cultured butter (such as Bellefield) has had a live butter culture added and is then left to develop for several days. This process lowers the lactose content of the butter, and makes it more acceptable to people with lactose intolerance. It has a slightly tangy, delicious sour cream flavour.

Cultured butter is what our butter-eating ancestors would have mostly eaten. Sweet butter has become the norm since the early 20th century, with industrial food production and refrigeration. But cultured butter is actually easier to digest. 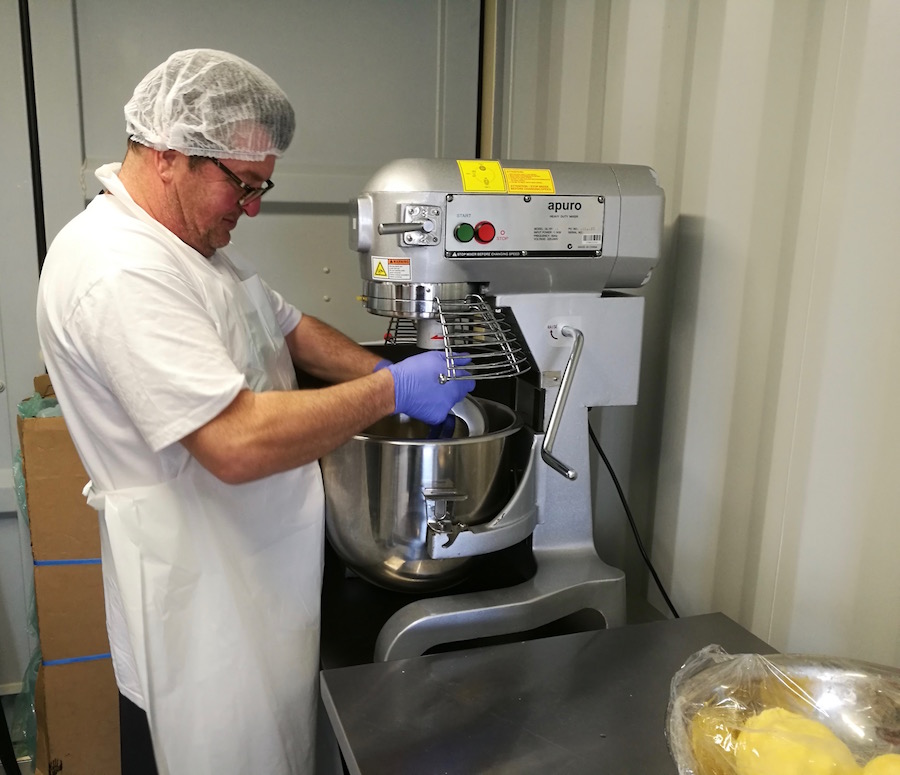 Steve with Bluebelle, the butter mixer.

The making of butter

I discovered that traditional butter making is a very hands-on business.

Steve and Jan showed me all the stages of making butter, starting with the 10 litre bags of cream in the fridge. The cream is heated gently and culture is added. The cream is left for 24 hours to develop the culture, and then refrigerated to ripen for several days.

Next the butter is churned in “Bluebelle”, the big mixer. Some producers use churns, some use mixers like this one, which was recommended by their Australian colleague (and mentor) Pepe Saya, in Sydney. “He’s been really helpful.”

At a certain point in the churning the butter separates from the buttermilk.

The buttermilk is drained off and bottled. It’s true cultured buttermilk and is prized by chefs – it’s a very scarce product.

After this, Steve washes the butter and adds the flavours, working the butter by hand.

Jan and Steve have organized their family business with a clear division of labour. Steve makes the butter, while Jan does the research and admin and runs the website. Jan is also in charge of wrapping the butter into elegant little parcels. They both turn out on the weekends for the farmers’ markets. 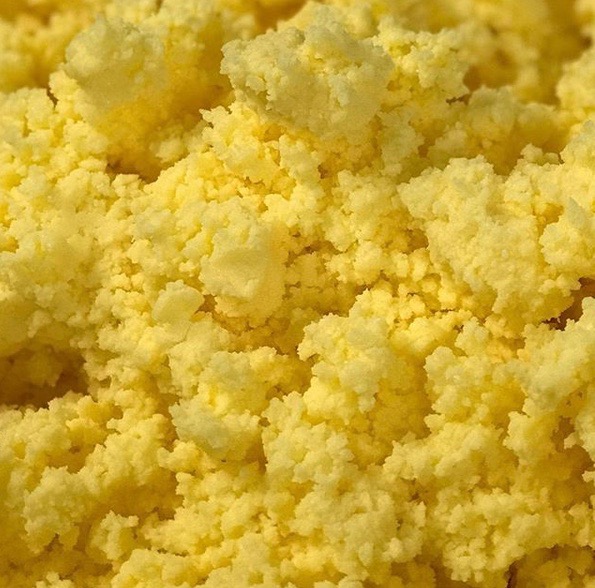 The “popcorn” stage, where butter has separated out from the buttermilk.

There’s a limit to how much butter can be produced in the current premises. They can only handle 60 litres of cream at a time, which yields 24 to 25kg of butter, plus buttermilk.

They’re already thinking ahead to the next stage, which will involve bigger premises.

Next step in the business involves sourcing the cream directly from local jersey herds. They’re currently working with local farmers to set this up.

Apart from the Waikato farmers’ markets, Bellefield butter is so far only available in one Auckland retailer, Sabato in Mt Eden. There’s plenty of room for expanding the market, with products that are in such demand.

The business of butter

Steve and Jan have been taking the butter business seriously right from the start. They’ve done the research and navigated the food safety regulations. They’ve been working with business mentors and advisors all along, and connecting with colleagues internationally.

And they’ve been networking very effectively locally. I heard about Bellefield butter months before I actually got to taste some. Local food organization Waikato Food Inc has been incredibly supportive. “Joining Waikato Food Inc was the best $100 we’ve ever spent,” Steve comments.

One of the many clever things about Bellefield butter, I think, is that it’s an added value product. It’s not “just” small batch, artisan, premium, traditionally made cultured butter – it’s more than that. The added value (flavoured butter, rather than just making a primary product) is a much stronger and more sustainable business model, especially for a local food enterprise.

Getting my hands on the butter

At the end of the interview, I actually got my hands on the butter! After I’d washed my hands and suited up with an apron and hairnet and gloves, I had a go at rolling the butter into parcels. Even through the gloves I could feel the beautiful soft texture. The container was full of the delicious aromas of butter, chilli and lime – plus a hint of garlic, which Steve was going to do next. I weighed a 100g lump of butter, and worked it with my hands until it turned into a neat cylinder. Mine definitely wasn’t as tidy as Steve’s. I don’t think he’s going to hire me as an assistant any time soon.

And I was delighted when they sent me home with a parcel of butter that I’d rolled myself. 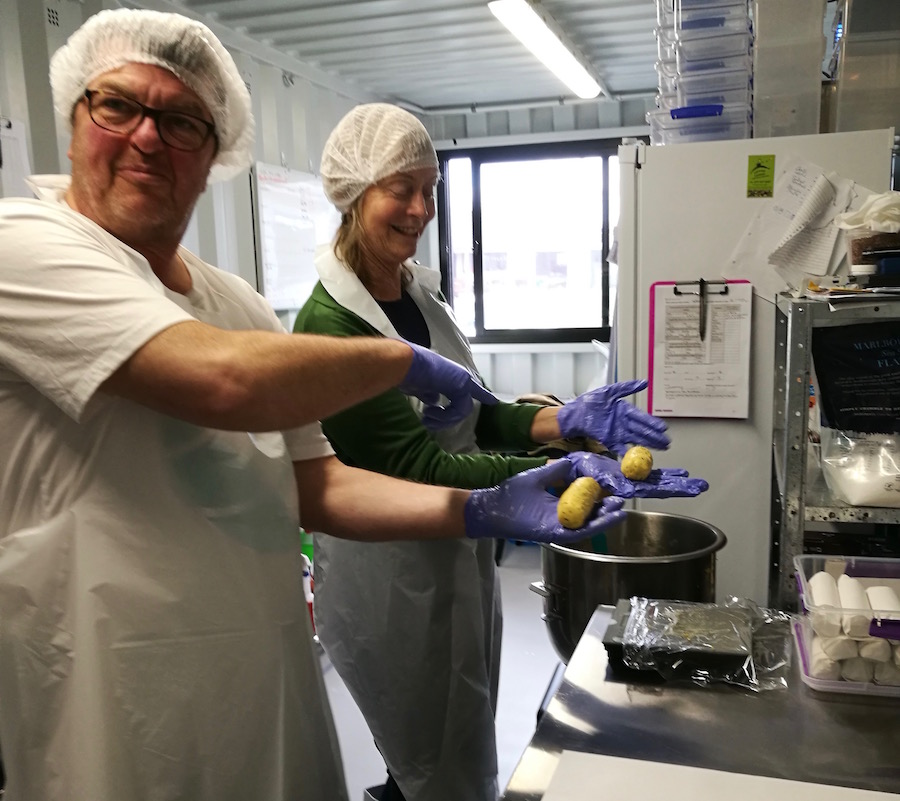 Me rolling butter. Not up to Steve’s usual standards!

Steve and Jan say it’s amazing, to watch people trying your products and loving them. “You can’t beat the feedback,” Steve says. At a recent “Meet the Maker” food event at Hayes Common restaurant in Hamilton East, they enjoyed seeing the chefs come up with inspiring ways to use their butters. (And the diners licking their plates!)

There’s a core product range of six divine flavours, and Steve and Jan produce others for special occasions.

The core flavours are chilli and lime; maple; sea salt; manuka honey; roasted garlic; and pohutukawa smoked. The pohutukawa smoked flavour was dreamed up by Jake from Dough Bros restaurant in Hamilton.

I got to taste the current special flavour, miso, at the farmers’ market on the weekend. It was like a very classy marmite – yum! 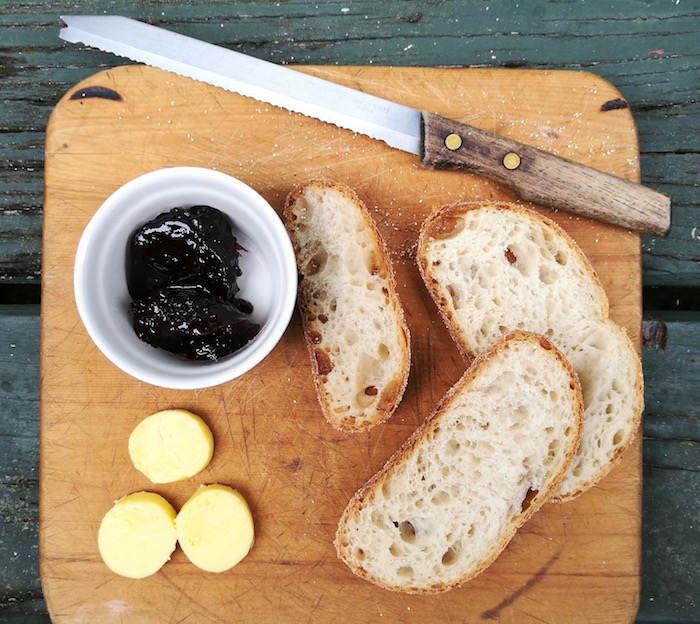 Yummy things to do with Bellefield butter

Because Bellefield butter is a live product, it doesn’t last forever. However, it’s so delicious that this is unlikely to be a problem. Earlier this year one of my friends bought me some Bellefield butter for a birthday present, but she ate it before she could deliver it to me. (A bit like Pooh Bear and the honey.)

The chilli and lime butter goes well on pan-fried gurnard, and it adds a zip to scrambled eggs.

The roasted garlic flavour is great on grilled steak.

Sea salt flavoured butter is amazing on a toasted slice of Volare pain au levain with a dollop of Sweetree Marakopa Spring honey.

The maple flavoured butter goes with pancakes (of course!)

I’m hanging out for the asparagus season to try roasted asparagus with manuka honey butter – a combination suggested by a local Bellefield butter fan.