The kitchen is full of autumnal produce. In the vege box there are plenty of pumpkins. Also beets, bok choi, feijoas, apples, nashi, and persimmons. Great potatoes, but this year’s kumara harvest is just about finished. A few sun-ripened outdoor tomatoes, eggplants and peppers are still available.

When you eat local, you get used to eating with the seasons.

Supermarkets and the global food business have got us so accustomed to buying anything when we want it, that we don’t know what’s in season.

Fresh in-season produce has the best flavour and almost certainly the best nutritional value too. I get great enjoyment from cooking seasonally. It reduces the range of choice, which is good for sparking creativity.

In the Waikato we can grow fresh greens and herbs outdoors pretty much all year round. Different kinds of greens grow better at different times. In our not very well planned garden in May there’s plentiful silverbeet, mustard greens, land cress, curly endive and chicory leaves, and there’s also New Zealand spinach, although it will die back as soon as we get a frost. And in the unweeded corners there’s chickweed, which is a beautiful, highly nutritious wild salad green with a mild flavour that mixes well with the more tangy cress and endive.

Other, more organised growers have kale, leeks and rocket in abundance. My friend and fellow blogger Andrea Graves, has carrots and parsnips. www.peacefulgreenday.com She is a much better gardener than I am. 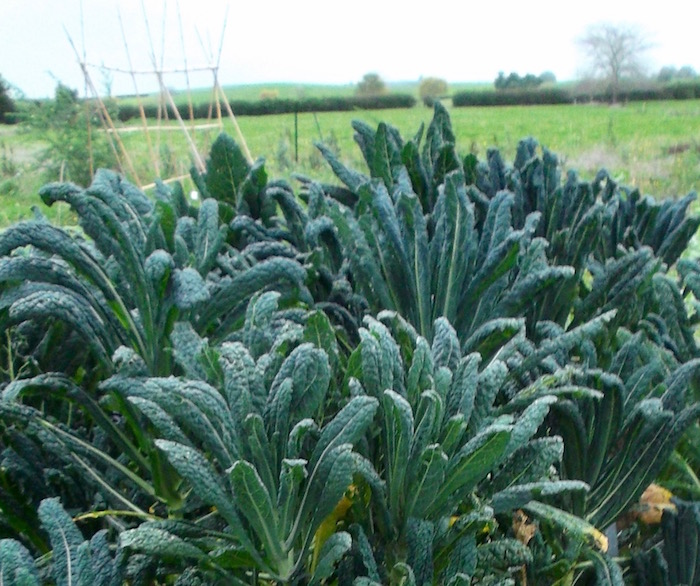 Our feijoa tree is having a year off (sometimes they do that). But there are plenty of spare feijoas in the neighbourhood. This week we scored a bag of perfectly ripe red guavas from my friend Clare. My son Albert made a wonderful crumble – see the recipe later on in this post. Guavas have a few small crunchy seeds, which are impossible to remove without putting them through a sieve. But the flavour is so great that I’m not going to be fussy.

Seasonal at the market? Not always

Interestingly, the fresh produce at Hamilton Farmers’ Market isn’t all seasonal. There are several stallholders selling vegetables grown in greenhouses. Some of this is excellent quality. Frans de Jong of Southern Belle produces superb sweet bell peppers in his greenhouse using biological agriculture methods, including beneficial insects and compost tea. He takes a few (well-deserved) months off in the middle of winter. And Steven Joe of Plainsview Gardens near Te Aroha sells high-quality greenhouse tomatoes most of the year.

Chickens are seasonal producers also. My chicken-keeping friends report that egg laying drops off in the colder months. (When I kept chickens, they also stopped laying in the heat of the summer. And when they got clucky. It was annoying, but understandable.)

Andrea Graves (who I mentioned earlier) also has a very interesting and informative chicken blog www.keepingchickensnz.com

In order for chickens to produce eggs all year round they need to stay indoors. And that very often means battery farm conditions. Consumers need to be vigilant with producers that claim to sell free-range eggs.

My husband Matthew suggests that I am being a bit hypocritical. “Are you saying that you don’t think we should be eating eggs in winter?” he asks. 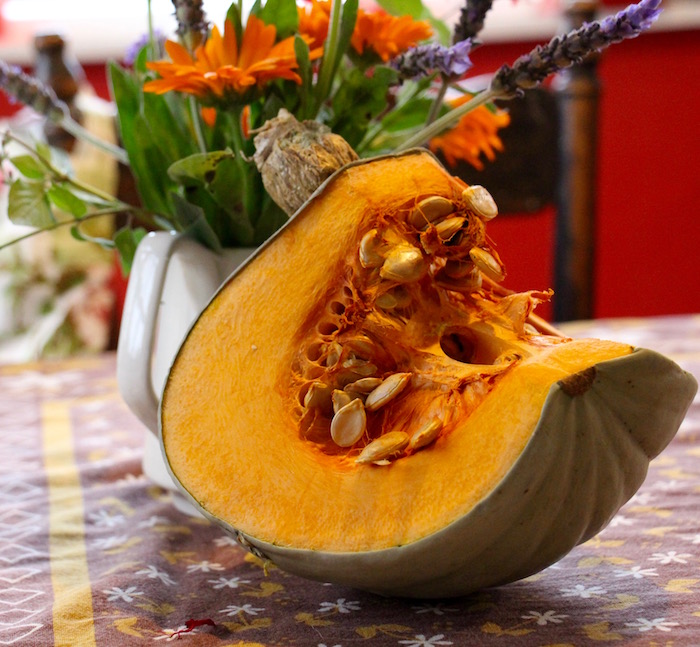 Chop up one onion (or a leek) and a clove of garlic and fry in butter. Add a stalk of celery and a handful of parsley, chopped finely. Add the cooked pumpkin (scoop the flesh out of the skin if you didn’t peel it earlier), and 2 litres of water or stock. Add stock powder if you think it needs some extra flavour. I use Rapunzel organic vege stock powder, which doesn’t contain MSG or other chemical additives. (But it comes all the way from Germany!) I get it from Village Organics, which is Hamilton’s only specialist organic shop.

Cook for 45 minutes. Put through a mouli or blender. Add a can of coconut cream – I recommend Ceres or Trade Aid. They are not cheap, but the flavour and quality is great, and there are no chemical ingredients. (Read the labels of the cheaper brands of coconut cream!)

We don’t eat many desserts, but this one goes down well with kefir or yoghurt. If there’s any left it makes a great breakfast.

¾ cup flour – white, wholemeal or half and half

½ cup oats – Harroways are grown in the South Island

Feijoas and guavas – about 1 1/2 cups of each, depending on the size of your pan. Cut feijoas in half and scoop out the flesh. The guavas don’t need any preparation, just throw them in whole.

Place fruit in a buttered oven dish. Sprinkle the crumble mix over the top.

Bake at 180 degC for half an hour or a little longer, until fruit is soft and topping is brown.

This interesting chutney recipe is adapted from Elizabeth David’s Spices, Salts and Aromatics in the English Kitchen (Penguin, 1981).

2 cloves of garlic, peeled and minced

a handful of raisins

Place all ingredients in a stainless steel preserving pan. Bring gently to the boil. Cook steadily, but not at a gallop, until the liquid has reduced and mixture is thick, but not too dry. This will take about an hour. Stir frequently, especially towards the end of cooking, because chutney can stick and burn easily.

Ladle into sterilized jars and seal.